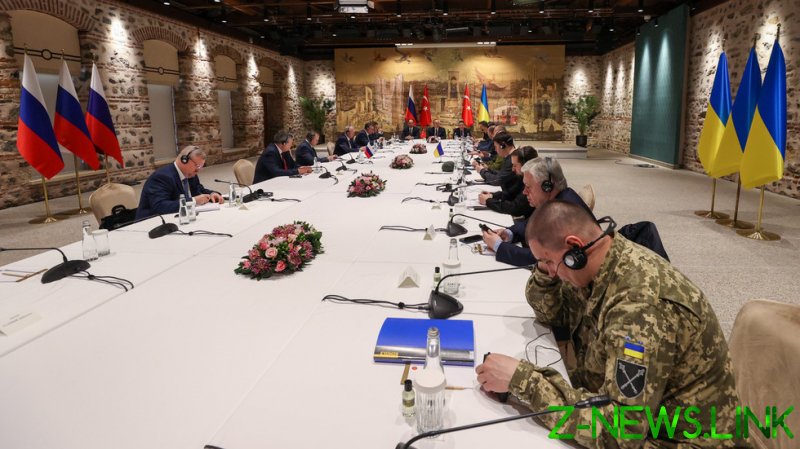 29 Mar, 2022 14:22 HomeRussia & FSU Highlights from Russia-Ukraine peace talks in Turkey After a month of hostilities, Kiev has come up with a written proposal for what it wants in a peace treaty 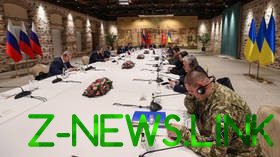 On Tuesday, Turkey hosted the latest round of peace talks between Russia and Ukraine. The Ukrainian side has come up with a written proposal for a peace treaty between the two nations, Russia’s top negotiator Vladimir Medinsky told the media after the session, which he called “substantive.” The proposal will be relayed to Russian President Vladimir Putin for consideration, Medinsky said. Here is what else emerged after the talks.

Russian offensive scaled down
An immediate practical effect of the talks will be a de-escalation of military activities in some parts of Ukraine, the Russian Defense Ministry announced. In particular, it pledged to “dramatically” reduce its operations near the cities of Chernigov and Kiev, the capital.

NATO-like security guarantees
David Arakhamia, Medinsky’s opposite number in the Ukrainian delegation, said Kiev had sought a security guarantee similar to that contained in Article 5 of the North Atlantic Treaty. He named the UK, China, the US, Turkey, France, Canada, Italy, Poland and Israel as possible providers. Some of them have given their preliminary agreement, he said. Medinsky said Russia would be one of the guarantors as well.

No military blocs and non-nuclear Ukraine
In the proposal, Ukraine pledged not to join any military alliance, not to host foreign military bases or foreign troops, Medinsky said. Even military exercises would require prior approval from guarantors, according to the proposal. Kiev also pledged not to seek to obtain weapons of mass destruction, including nuclear weapons, the official added. But in return Russia will not object to Ukraine joining the EU one day.

Crimea, Donbass unresolved
According to Medinsky, Kiev offered to pledge not to use military force in an attempt to restore its sovereignty over Ukraine or the breakaway regions of Donetsk and Lugansk. He stressed that Moscow did not commit to having the Ukrainian wording in the final version of any peace treaty.
Russia considers Crimea to be part of its territory and wants Kiev to recognize it as such. It also recognized the Donetsk and Lugansk People’s Republics as sovereign states days before launching its attack against Ukraine last month.

Borders in question
Medinsky said Kiev did not state whether it would relinquish its territorial claim to Donetsk and Lugansk. Prior to February, Ukraine controlled a portion of Donetsk and Lugansk but considers the regions to be its own territory.
Arakhamia made it clear that Kiev will assert sovereignty over the entire territory that Ukraine had when it declared independence in 1991, saying there could be no compromise on this point.

New conditions for Zelensky-Putin meeting
As another concession to Kiev, Moscow agreed to organize a meeting between Russian President Vladimir Putin and his Ukrainian counterpart Volodymyr Zelensky as part of the final phase of negotiations over the future peace treaty. Moscow previously said such a meeting could only be scheduled once the document was finalized and inked by the respective foreign ministers. Having a meeting as soon as possible would speed up the resolution, Moscow said.