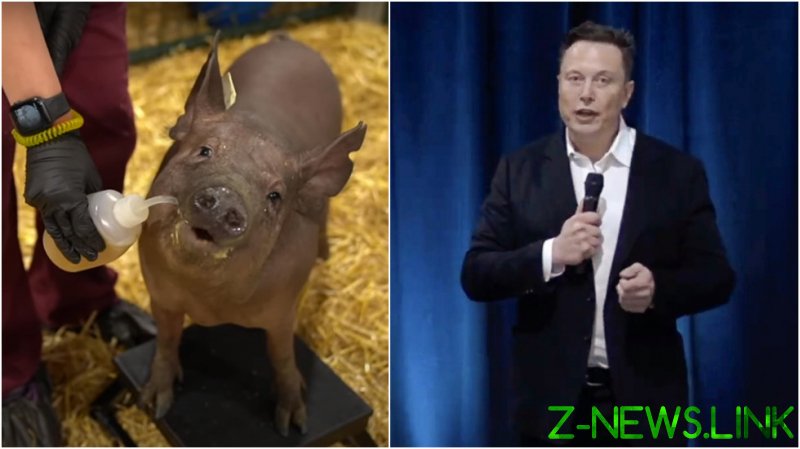 Musk’s Neuralink progress update on Friday showed off a functional device implanted into a pig, which he says could someday cure a range of “important brain and spine problems,” including memory loss, blindness, seizures, strokes and even drug addiction.

“I’m really excited to show you what we’ve got. I think it’s going to blow your mind,” Musk said at the start of the presentation, comparing the device to “a Fitbit in your skull with tiny wires.”

After coaxing a skittish sow named Gertrude to leave her pen, Musk introduced what he called the “three little pigs demo,” showing the Neuralink picking up the animal’s brain activity in real time, represented by audible beeps. A second pig had a previously installed device removed, which Musk said illustrated how one could live a “healthy and happy” life after taking out the implant. The third animal had no device, presumably as a control.

The latest version of the Neuralink has been shrunk down to the size of a “large coin,” and is thin enough to sit flush with the skull. “It’s invisible and all you can see afterwards is a tiny scar. And if it’s under your hair, you can’t see it at all,” Musk said.

In July, the FDA granted the Neuralink a “breakthrough device designation,” allowing the project to march further into its testing stages, but Musk said it is now in great need of advanced problem solvers, noting that the primary purpose of Friday’s demonstration was “recruiting.”

“We want people who are great at solving problems to join the company and help us complete this device, take care of the animals, write the software, create the chips and productionize everything,” he said.

The call has already drawn interest from the internet, though perhaps not quite what the entrepreneur is looking for.

“If you pay off my student loan AND mortgage, I’ll violate medical ethics laws to advance Neuralink. I can be bought, let’s talk!” one user said jokingly (we hope).

While Musk celebrated the successful demonstration with a mysterious tweet teasing “conceptual telepathy,” some netizens were far less impressed with Friday’s tech expo, one pointing to dystopian fiction for a hint of what could come of the technology.

Others were more optimistic about the new tech, some arguing it could mark a “leap in evolution” and further bridge the gap between man and machine, a development one user called “scary,” but “inevitable.”

Based in San Francisco, the Neuralink corporation was co-founded by Musk in 2016, aiming to develop wireless implants capable of linking the brain to computers with thousands of electrodes, which could ultimately meld humans with artificial intelligence. The project employs about 100 people and has received some $158 million in funding, $100 million of which was put up by Musk himself, according to Reuters.