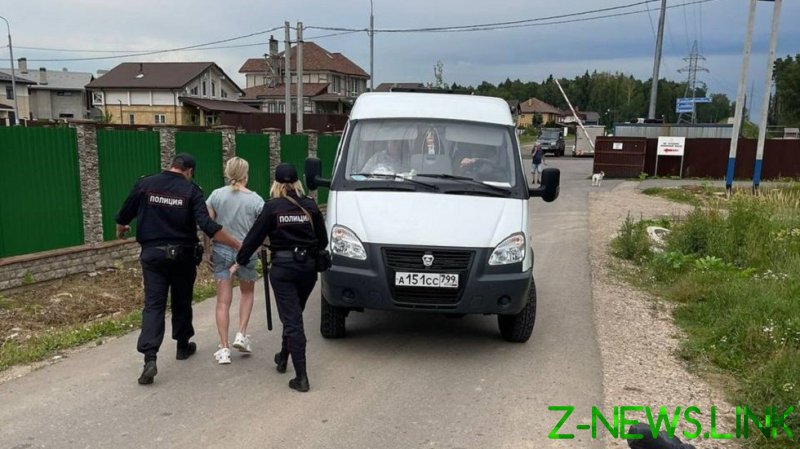 TV editor Marina Ovsyannikova, who interrupted a live broadcast in March with a banner condemning Russia’s military operation in Ukraine, was detained in the Moscow region on Saturday, according to a statement posted on her social media.

The whereabouts of the former Channel One employee is currently unknown, according to the post. Imagery shows her being led away by two police officers.

Officials haven’t made any comments on her apparently being taken into custody or any reasons behind it. Later in the day, she was released.

The detention came two days after Ovsyannikova staged a protest outside the Kremlin, condemning the ongoing conflict in Ukraine and, specifically, the deaths of children during the hostilities.

Ovsyannikova displayed toys covered in ‘blood’ during her stunt and held a placard branding Russia’s president a “murderer” and Russian troops “fascists,” imagery from the scene shows. No action was taken against her during the protest.

Ovsyannikova, a longtime video editor with Russia’s TV Channel One, made headlines in mid-March when she crashed a live news broadcast to protest the conflict. At the time, the then-video editor displayed a poster reading in English and Russian: “No war. Stop the war. Don’t trust propaganda. They’re lying to you here. Russians against war.” She also released a pre-recorded message online, condemning the hostilities.

While the stunt got Ovsyannikova a minor fine in Russia, it scored her praise abroad. Having quit her job with Channel One shortly after her protest, she was hired in early April as a freelance correspondent for German newspaper Die Welt. In late May, she was awarded the Vaclav Havel Prize for Creative Dissent during the annual Oslo Freedom Forum in Norway. After her three-month contract with Die Welt expired, Ovsyannikova ultimately returned to Russia.