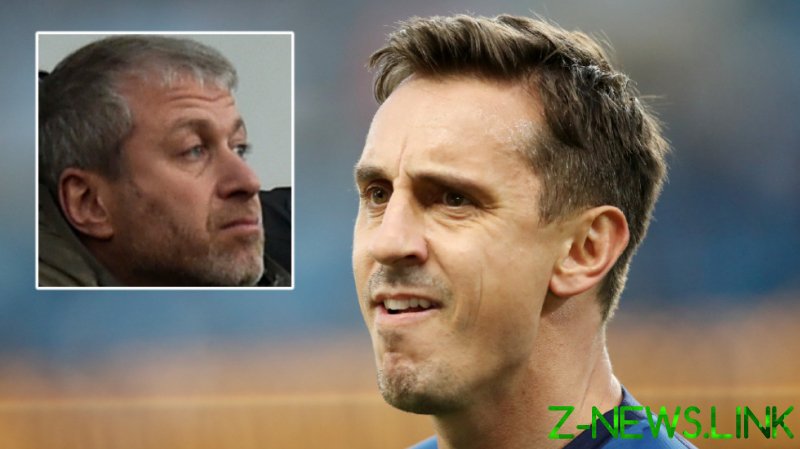 Livid pundit Neville blasted bosses at top British clubs for being “imposters” who have “nothing to do with football in this country”, calling them “bottle merchants” with “no voice” and slamming the “hideous” timing of the developments during a pandemic when many people and clubs are struggling.

The United legend was left seething by plans revealed on Sunday to pursue the new league, which is reportedly backed by 11 clubs across the continent including five English clubs, one of which is said to be Abramovich’s Blues.

“It’s an absolute disgrace and we have to wrestle back the power in this country from the clubs at the top of this league,” fumed the eight-time Premier League winner, calling for clubs to be docked points, stripped of titles, heavily fined and even relegated if they sign up to the proposals.

“I’ve been calling for 12 months, as part of another group, for an independent regulator to bring checks and balances in place to stop this happening.

“It’s pure greed. They’re imposters. The owners of [United], Liverpool, Chelsea, Manchester City are nothing to do with football in this country.

“There’s 100-odd years of history in this country from fans who have lived and loved these clubs and they need protecting.

“Liverpool pretend ‘you’ll never walk alone’ – the people’s club, the fans’ club. Manchester United: 100 years, born out of workers around [Manchester], and they’re breaking out to a competition that they can’t be relegated from?

“Deduct them all points tomorrow, put them at the bottom of the league and take the money off them. Seriously, you have got to stamp on this. It’s a criminal act against football fans in this country, make no mistake about it. Deduct them points, deduct them money and punish them.

“Let them break away but punish them straight away. If they announce a letter of intent has been signed at six clubs, they should be punished heavily. Massive fines, points deductions, take the titles off them – who cares?

“Give the title to Burnley, let Fulham stay up. Relegate United, Liverpool, Arsenal. They should suffer the most. Chelsea, City – new money in the game, they’ve sort of come forward [in support]. I’m not happy with them either, let’s be clear.”

“They’re absolute bottle merchants,” he said, calling the businessmen cowardly. “You never hear from the owners of these clubs. They’ve got no voice. They’ll probably hide in a few weeks and say it was nothing to do with them, ‘we were only talking about it.’

“Seriously, in the midst of a pandemic, an economic crisis, football clubs at [non-league] level going bust, nearly, furloughing players. [Lower league] clubs are on the edge and this lot are having Zoom calls about breaking away and creating more greed?

“They’ll be amending that statement as we speak. They’ll have seen the reaction, not just of people on social media, not just of the government… they’ll be backtracking down the road because they are bottle merchants, this lot. Let’s make no mistake about it.

“This is a grab, an absolute grab. The timing is hideous. What world are these people living in, to think that they can bring this forward at this moment in time?

“They’ve got no loyalty to this country and these leagues. This is disowning your own club stuff. It’s absolutely embarrassing. It’s never going to happen.”

UEFA, the Premier League and other top divisions across Europe issued statements on Sunday condemning the plans and warning that they would ruin the competitive core of football by creating a league limited to the established heavyweights, increasing the financial and sporting gulf between the elite and the current leagues.

Irate Neville was scathing about his beloved club with whom he won the Champions League twice during a senior career lasting almost 20 years.

“I watched [Arsenal] earlier today, they’re an absolute shambles of a football club at the moment. Tottenham aren’t in the Champions League and they want a god-given right to be in there?

“They’re an absolute joke and the time has come now for independent regulators to stop these clubs having the power base. Enough is enough.

“Some of the other clubs in the league that are [potentially] missing out, that are actually doing really well, are acting like big clubs. Being a big club is not just about having the global fanbase.

“I’d like to think that Manchester United, Liverpool would stand there in the face of this and say ‘something’s not right here – let’s collaborate with the game to try to get a better competition, a better Champions League.'”

Asked for his thoughts after his side beat Burnley at Old Trafford earlier in the day, United boss Ole Gunnar Solskjaer was non-committal.

“I’ve seen the news about the speculation this morning so I can’t really say too much,” Solskjaer said in his post-match interview.

“I need to sit down and see what it is and the club will probably comment on it later.

“I don’t know the ins-and-outs – I need to find out and the club will issue a comment, probably.”