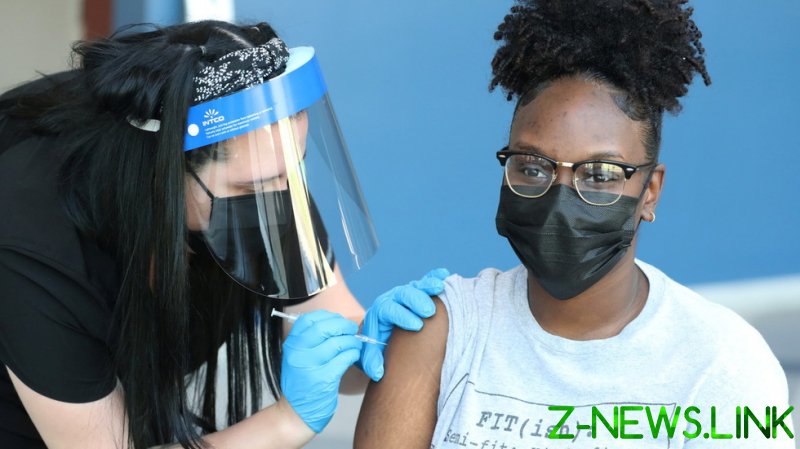 The Associated Press-NORC poll, which was released on Friday, found that 45% of unvaccinated respondents said they “definitely” won’t get inoculated against the virus, and 35% indicated that they “probably” won’t do so. Only 19% of those who haven’t been vaccinated intend to get the shots, and just 3% consider those plans definite.

The responses suggest that there is little room for growth in US vaccination rates because 67% of participants had already received the jabs, and only 1% of overall respondents said they definitely will get inoculated. Just 5% said they will probably get vaccinated. Other unvaccinated Americans don’t plan to get jabbed, meaning around 73% is the apparent upside for the nation’s adult vaccination rate.

President Joe Biden had aimed to have 70 percent of US adults vaccinated with at least their first dose by July 4, but he fell short at 67%. Nearly three weeks beyond his target date, about 69% of adults have received a Covid-19 shot, according to CDC data. Nearly 60% are fully vaccinated among adults, and the rate is 49% for the overall population.

Perhaps more troubling for vaccine proponents is the declining rate of new vaccinations. After the rollout hit a one-day record of 4.6 million doses delivered on April 10, the daily pace has slowed to around 500,000 in recent weeks. In Alabama, which ranks last in the nation with just 34% of the population fully vaccinated and only a trickle of residents rolling up their sleeves to get the shots, Governor Kay Ivey became so frustrated on Thursday that she said it’s “time to blame the unvaccinated folks” for rising Covid-19 infections.

While 83% of Democrat adults have gotten vaccinated, according to the Associated Press-NORC poll, just 51% of Republicans have done so. And Republicans are more skeptical that the vaccines will be effective against the highly infectious Delta variant of Covid-19, which has driven the country’s recent jump in new cases.

The poll found that 58% of Republicans expect the vaccines to work well against new variants, while 81% of Democrats expressed confidence. Among unvaccinated Americans, 64% don’t trust the shots to prevent the spread of Delta.

An Israeli government study earlier this month found that the Pfizer-BioNTech vaccine is 64% effective at preventing symptomatic Covid-19 cases caused by the Delta variant. The drugmaker has claimed a 95% overall efficacy rate. Biden declared earlier this week that, “You’re not going to get Covid if you have these vaccinations.”

But infections among vaccinated Americans have risen amid the spread of the Delta variant. In fact, there have been such cases among White House staffers, but Biden’s press secretary, Jen Psaki, declined on Friday to tell reporters the number of so-called “breakthrough” infections.

With most unvaccinated Americans firmly entrenched in their decision, some public-health experts are calling for tougher measures to force people to get the shots. Dr. Anthony Fauci, Biden’s chief medical adviser, has called for local governments, businesses and schools to mandate vaccination because the administration would face too much public backlash if it tried to make the jabs compulsory.

Former White House Covid-19 adviser Andy Slavitt suggested on Thursday in a CNN interview that unvaccinated workers and students should be forced to take tests daily, at their own expense, to prove that they’re not infected. Making people come in an hour before work or class to take a Covid-19 test and pay for it will cause more Americans to “take the option to get vaccinated,” he argued.

“We should be really seriously considering whether schools, workplaces, government agencies ought to be saying, ‘Hey, if you’re coming here, you need to be vaccinated, and if you’re not, you need to show you’ve got a negative test every single day,” Slavitt said.