Home / WORLD / ‘He’s got some stamina!’ Shirtless Tyson Fury celebrates with party at Las Vegas nightclub after 11-round war with Wilder (VIDEO)

‘He’s got some stamina!’ Shirtless Tyson Fury celebrates with party at Las Vegas nightclub after 11-round war with Wilder (VIDEO) 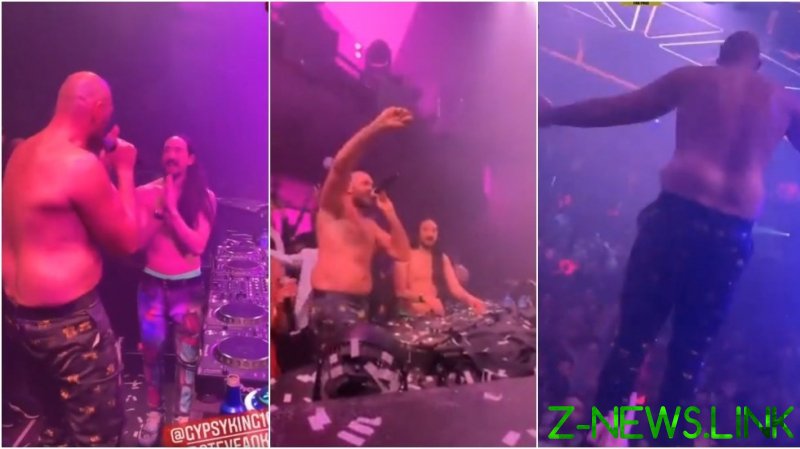 Just hours after Fury had dealt the telling blow in his three-fight series with American Wilder in front of a capacity crowd at the T-Mobile Arena, the newly-reconfirmed WBC heavyweight champion found himself entertaining a very different audience altogether, after he joined world famous DJ Steve Aoki at the nearby Hakkasan nightclub.

Video footage from Fury’s after-party shows the shirtless Briton dancing and egging on the crowd alongside the Grammy-nominated Aoki as well as, for what was the second time that evening, treating the assembled masses to another brief sing-song after he had already performed a rendition of ‘Walking In Memphis’ immediately after the win in what is fast becoming one of boxing’s most entertaining post-fight rituals.

The song this time around? Queen’s ‘We Are the Champions’, appropriately enough.

Aoki also posed for a photograph with Fury and his world titles, with the DJ referring to him as the “greatest of all time” in the caption.

Fury’s wife Paris was also on hand at the celebrations and was among those who uploaded glimpses into the post-fight celebrations on stage – a platform on which Fury often appears at his most comfortable – showing the boxing great letting loose in front of hundreds of partygoers.

If all of this is producing a sense of deja-vu in some fight fans, that is likely because this was the same venue that Fury celebrated his victory against Wilder at last year – with Aoki again on hand to act as the MC on that occasion.

“Got some stamina, Fury,” said one fan of the footage, which another highlighted would have come just three hours after the end of his fight.

“11 rounds with Wilder and going down twice and out partying after the fight,” wrote another. “Someone should check if blood flows through his body.”