Home / WORLD / ‘He’s already got an Emmy for acting!’: Cuomo roasted for comparing himself & Fauci to ‘modern day De Niro and Pacino’

‘He’s already got an Emmy for acting!’: Cuomo roasted for comparing himself & Fauci to ‘modern day De Niro and Pacino’ 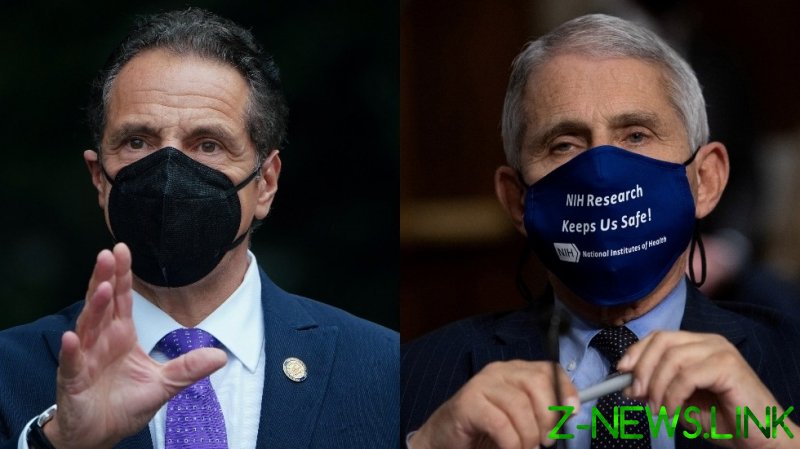 “I think your voice on saying that the vaccines are safe would be important. I said as soon as the vaccine is deemed ready and safe, I’ll be the first one to take [it],” Cuomo said on Monday, while speaking with Fauci.

“Maybe we enlist you,” he continued, “I’ll do it with you, we do an ad telling New Yorkers it’s safe to take the vaccine.”

“Put us together, we’re like the modern day De Niro and Pacino,” he added, as Fauci cackled. “You can be whichever you want, De Niro or Pacino.”

Fauci replied he couldn’t choose because he is a fan of both actors, who have shared the screen in the films ‘The Irishman’, ‘Righteous Kill’, and ‘Heat’ – each of which includes one or both men portraying murderers. They also both starred in ‘The Godfather: Part II’ as gangsters, but never shared a scene.

Cuomo’s odd comparison has drawn the ire of critics on social media, with some mocking the governor, and others furthering their ongoing questioning of the competence of his leadership during the pandemic.

“Do us all a favor and move to Hollywood then,” Fox News meteorologist Janice Dean tweeted in reaction to Cuomo. Dean, who lost both her parents-in-law to Covid-19, has been highly critical of Cuomo for an early order forcing New York nursing homes to accept Covid-positive patients, as well as his decision to release and promote a book during the pandemic.

“Honestly @NYGovCuomo would rather be a celebrity than a governor. And he’s already got an Emmy for acting!” she added.

“Yeah in ‘Righteous Kill,’” Tablet Magazine associate editor Noam Blum tweeted in reaction to Cuomo’s comparison, then linking to a collection of the poor reviews the 2008 box office bomb received.

“I’d take Dr. Fauci more seriously if he would give more scrutiny to Gov. Cuomo’s disastrous nursing home policies instead of laughing with him on TV when he compares them to characters from ‘The Godfather,’” writer Greg Price added.