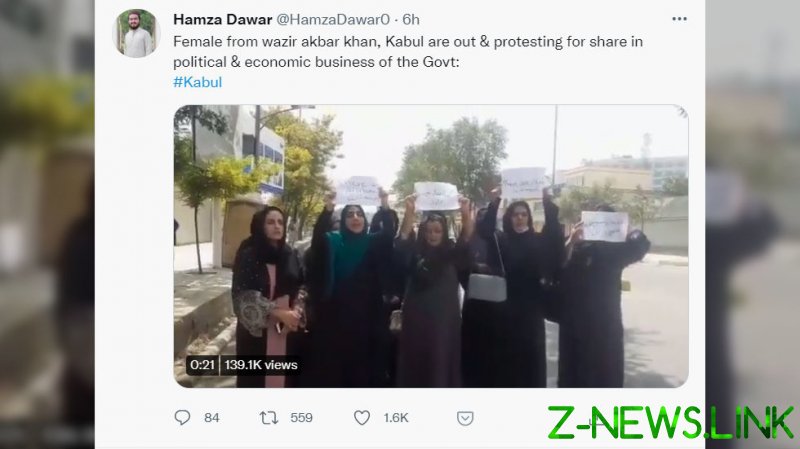 On Tuesday, a small group of women in Kabul boldly spoke out in public to demand that the new Taliban regime commit to the maintenance of women’s rights in the war-torn nation.

Kabul-based journalists have shared videos and photos of the women, who stood chanting slogans and holding heartfelt messages written on pieces of paper.

“Work, education, political participation is our right. Don’t erase women. Be the voice of Afghan women,” the women cried, according to journalist Golnaz Esfandiari.

In other footage, shared by Iranian journalist and activist Masih Alinejad, armed Taliban militants can be seen watching over the protesting women, but not intervening. Describing them as “brave,” Alinejad said she hoped more men and women would join them.

Since the Taliban swept through Afghanistan, ultimately capturing Kabul almost unopposed on Sunday, world leaders and activists have been expressing concern that the fundamentalist group will seek to reverse the improvements in women’s lives that have been secured over the previous two decades.

On Monday, the BBC reported that Afghanistan’s main TV channels, including TOLOnews, were still broadcasting, but female presenters were absent.

Media reports have also suggested the Taliban had expelled women workers from bank jobs in the southern city of Kandahar, which had fallen to the Islamist group a week earlier. Gunmen reportedly escorted nine back to their homes and told them not to return. Similar events were reported in Herat.

Many women adopted traditional attire over the weekend, refraining from wearing Western-style clothing such as jeans and T-shirts. Some donned the trademark all-encompassing blue burqa the Taliban consider respectable attire. Billboards across the capital that had been pasted with adverts featuring women were swiftly painted over by shopkeepers fearful of reprisals.

The Taliban subscribes to strict Sharia law, under which women are subordinate to men and are prohibited from undertaking work, while girls are forbidden from receiving an education. The law also states that women should adopt conservative dress, including a hijab, or head covering, and should be accompanied by a man when leaving the house.

However, on Tuesday, the Taliban claimed on Afghan television that they did not want women to be the “victims” of the new regime. Enamullah Samangani, a member of the Taliban’s cultural commission, said women had no reason to be afraid and even noted that they “should be in the government structure, according to Sharia law.”

The group has also refuted reports that girls are being sent home from school.

Taliban spokesperson Sohail Shaheen told the BBC such rumours were untrue. He added that women would be allowed to work, leave home, and be educated, as long as they wore the hijab.

On Tuesday, TOLOnews shared on Twitter a video report by one of its female staff, Hasiba Etkpal, indicating that there was no absolute ban on women working in the media. As of today, after two days’ absence, women news anchors are back on screen.

A senior Taliban official has also this week been interviewed by a female television presenter, which would have been unthinkable when the group last ruled over the country.

However, women’s rights activists, including Pashtana Durrani from the non-profit organization Learn Afghanistan, who spoke to the BBC Breakfast program on Monday morning, warned that people must be aware that what the Taliban says and what it does are two different things.

While some have accused the militant group of being vague when it comes to setting out how exactly women’s rights will be protected under the new regime, its record does not bode well for women.

Between 1996 and 2001, when the Taliban last controlled Afghanistan, women were banned from work and study, and could not leave the house without a male companion. Humiliation, public floggings, and stonings to death were administered to those who broke the rules.