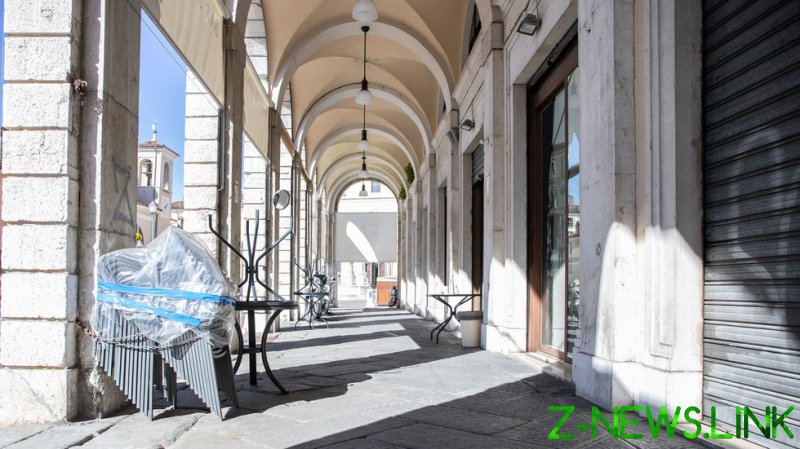 The Italian municipality of San Leo, in the northeastern region of Emilia-Romagna, might look like the perfect place for a visitor tired of crowded cities. Beautiful landscapes, narrow ancient streets, a historic castle where mysterious magician Count Cagliostro spent his last days, plus traditional Italian hospitality – these were the reasons tourists had been coming here. “Tourism matters a lot for Italy, it matters a lot for us, too,” says San Leo’s mayor, Leonardo Bindi.

Then coronavirus came, and the streets of San Leo grew quiet. The pandemic saw the borders closed and lockdowns imposed. But, as the summer of 2021 approaches, the hope that tourists might get a chance to travel anytime soon is fading. Emilia-Romagna, together with half of the country, is in the red zone – the area with the highest Covid-19 risk.

When asked how the vaccination campaign is unfolding in San Leo, Mr Bindi says: “Like in other Italian municipalities… There are some three thousand of us in San Leo and only 7% are vaccinated.”

Italy, one of the pandemic hotbeds in Europe, rolled out its vaccination campaign in December last year. Since then, in this country of 60 million, only 2.8 million have so far received two doses of the jab. These numbers are not the worst in Europe – compared with other EU nations, Italy’s inoculation rate is near the middle – but the bloc’s joint immunization campaign is being held back by shortages in both vaccine production and delivery.

Meanwhile, people in San Leo had a look around and realized they had a small chance to improve the situation, at least for themselves and their neighbours. Here’s the trick: from San Leo, only a half-hour’s drive can get you out of the EU and across the border with San Marino.

Unbound by EU obligations, the tiny republic of some 33,900 citizens has purchased Sputnik V, the Russian Covid-19 vaccine.

The rollout began at the end of February. Later, the republic also received a batch of Pfizer-BioNTech jabs. As of now, over 26% of San Marino’s vaccinable population have got their vaccines.

The republic’s successful immunization campaign pushed Bindi to team up with the mayor of the nearby Coriano municipality, Domenica Spinelli, to write their neighbour a letter asking for help.

“A lot of citizens from San Leo and Coriano work in San Marino,” Bindi told RT. “They’re spending a lot of time there, so we asked whether there would be a possibility to vaccinate them with Sputnik V. Of course, I think they [San Marino authorities] will vaccinate their citizens first, and then, I hope, they will take into account our request and communicate with the Italian Health Ministry. A lot of our citizens are supporting this demand, actually.”

That support is well reflected in local press coverage of the mayors’ request. “We want Sputnik” and “Give our workers Sputnik, too” some of the headlines say.

“Personally, I hope that the EMA [European Medicines Agency] authorization will arrive in the upcoming weeks, so we could use this jab in Italy as well. I read that it has a very high protection rate,” Mr Bindi says.

A lack of EMA approval for Sputnik V has already ruined the hopes for swift relief in another small Italian municipality.

Welcome to San Giovanni Bianco, in the northwestern region of Lombardy, which some 5,000 call home. That’s where Swedish professor emeritus of epidemiology Marcello Ferrada de Noli has a house and lives from time to time.

When the region faced a catastrophic rise in Covid-19 infections last summer, Professor De Noli was in Sweden. Once he realized how terrible the situation was, he got in his car and drove back to Italy.

“Since I’m a professor of epidemiology, I thought I could give them a hand,” he recalls, relaying his story to RT. “I discovered that, in San Giovanni Bianco, only 740 people aged 70 and older survived. Lombardia was one of the worst-hit regions.”

“In November, I contacted the local authority, namely the mayor, Marco Milesi, and told him I was ready to donate two doses for each of these 740 people,” Professor De Noli continues. “He said: ‘Well, that’s a good idea, but it can only be completed if the Russian vaccine is approved by the EMA.’

I contacted the EMA myself at the beginning of December. I called them, and it was a very strange conversation, because the person I was talking to told me, ‘I’m not authorized to give you more information.’ Then I wrote to them and got a reply saying that Sputnik V is not under the agency’s evaluation.”

Since then, the EMA has started to evaluate the Russian vaccine. However, it’s unclear how long it will take for the regulator to approve the jab for use by EU member states.

The EU legislation, the professor explained, has a special provision. In case of emergency, the member states may authorize the medicines they need, including vaccines, to be used on their territory. The responsibility will be all theirs, of course. Still, such a mechanism does exist. Hungary, for example, triggered it while rolling out immunization with Sputnik V back in February.

“The fact that the Hungarian national regulator has issued an emergency-use authorization [for Sputnik V] is not against European regulations,” Hungarian Foreign Minister Peter Szijjarto told RT.

Brussels’ joint campaign to provide enough vaccines for all member states failed, Szijjarto explained. So, the country was forced to look for its own options. “At the end of last year, just before Christmas, it was said that we should decide on a common day to start the European vaccination campaign, either 26 or 27 December, and that we shouldn’t vaccinate before that,” the Hungarian FM recalled. “Then, a small lorry appeared on the Austrian-Hungarian border, as far as I can recall, on 26 December. And we were looking around, saying, ‘OK, but where is the real one? I mean, is this it?’ And they said: ‘Yes, this is it.’

As of today, the Hungarian medicines regulator has approved seven vaccines to be used in the country, and four of them don’t have EMA approval. Yet some 1.8 million citizens have already received their jab. Quite a good result for a country with a population of some 9.7 million.

Other member states stand firm: we need EMA approval to allow the use of Sputnik on our territories, they say. But as no one knows how long the evaluation process might take, some state leaders are starting to run out of patience. “If the European coordination works, it will be fine. Otherwise, regarding health issues, you have to be ready to take your own steps. That’s what Angela Merkel said, and this is what I say here,” Italian Prime Minister Mario Draghi declared. According to German media, the country’s chancellor is also ready to act alone and let Sputnik V in, if there is no joint move from the EU in the foreseeable future.

Meanwhile, time is against the EU, whose members have already declared they face the third wave of Covid-19. In the words of the mayors of San Leo and Coriano: “We can’t just stand and watch.” They have already sent a message to the president of Emilia-Romagna, Stefano Bonaccini, asking him to unite the local mayors and demand from the state the “purchase and subsequent administration of any vaccine produced worldwide, regardless of political assessments that are – and must remain – completely unrelated to the fight against the pandemic.”

“On June 17, 2020 the European Commission presented a common strategy to accelerate the development, production and distribution of coronavirus vaccines,” their letter says.

“People in my municipality are not very aware of political things – they trust their authorities,” De Noli said. “They are not so eager to contest their decisions.” Out of 740 elderly residents he wanted to vaccinate, almost half have now received their jabs. “But now we are at the end of March. My initiative was in November last year. So, we could have had them all vaccinated by now,” the professor concludes, disheartened. He still doesn’t know how many of them have fallen ill since then, or how many may, avoidably, have died.