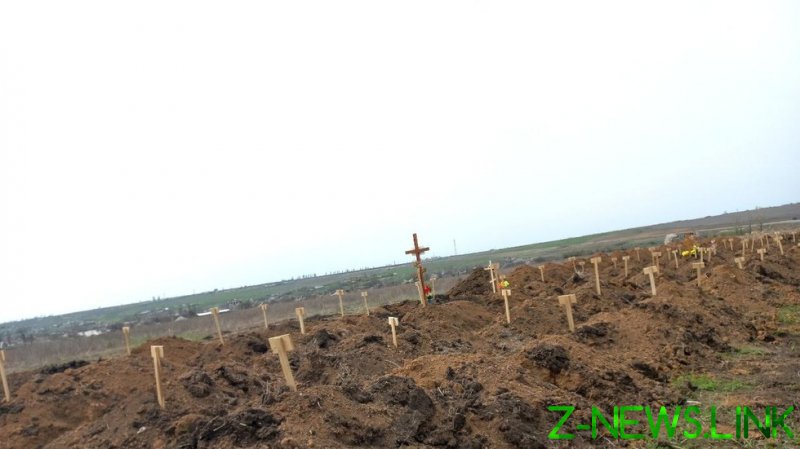 According to recent Western media, Russian forces have buried up to 9,000 Mariupol civilians in “mass graves” in a town just west of the Ukrainian city. These reports use satellite imagery as supposed evidence and repeat the claims of officials loyal to Kiev that “the bodies may have been buried in layers” and “the Russians dug trenches and filled them with corpses every day throughout April.”

I went to the site in question and found no mass graves.

On April 23, I joined RT journalist Roman Kosarev on a visit to the location, in the town of Mangush. What I saw were new, orderly grave plots including some still empty ones – an extension of a cemetery that already exists at the spot. No mass pit. Many of the graves have placards with the names and dates of birth of the deceased when available, and the remaining plots were numbered according to burial.

Since the media is essentially copy-pasting from the same source – the former mayor of Mariupol, Vadym Boichenko (who seems to be far from the city now) – I’ll cite from the Washington Post’s article.

Boichenko, the article notes, “called the site the ‘new Babyn Yar,’ referring to one the largest mass graves in Europe located in the outskirts of Kyiv, where 33,000 Jews where killed by Nazis in 1941 during World War II.”

This is ironic on several levels. A mayor who is whitewashing the neo-Nazis who have run amuck in hso city – notably those from the Azov Battalion, who have used civilians as human shields, occupied and militarized civilian infrastructure, point-blank executed civilians – is comparing an alleged (non-existent) mass grave to a Nazi massacre of WW2.

Meanwhile, the Kiev regime has re-written history, making WW2 Nazis and their collaborators heroes of the nation. The most notorious example being the World War Two figure Stepan Bandera.

Boichenko’s other alarming claim was that the alleged “mass grave” was “the biggest war crime of the 21st century.” We are only 22 years into it, but we’ve already seen the US-led invasion and destruction of Iraq, the levelling of Syria’s Raqqa, Saudi Arabia’s ongoing war in Yemen – all of which are much stronger contenders than the nowhere-to-be-found “mass graves” of Mangush.

In reality, the site has around 400 individual plots, including nearly 100 empty ones. The 9,000 bodies and “biggest war crime of the 21st century” were unverified claims made by a mayor who fled his city, promoted by media which down the page admitted they could independently verify the claims – but by then, the damage had been done.

While walking around the site, two men responsible for burials arrived, and when presented with the former mayor’s accusations of mass graves they vehemently rejected the claims.

“This is not a mass grave and no one is throwing bodies into a pit,” one told me.

According to them, they bury each person in a coffin and separate grave, details are logged in the morgue, and when any documents regarding name and age are given, the plot is marked with a placard containing those details. Otherwise a number is used.

Interestingly, they also noted that a section of the new graves included buried Ukrainian soldiers. “They’re human, too” one of the men said.

For those in doubt as to the location, see Roman’s report: his drone footage shows that it’s precisely the same location as shown in the satellite images used by Western media. 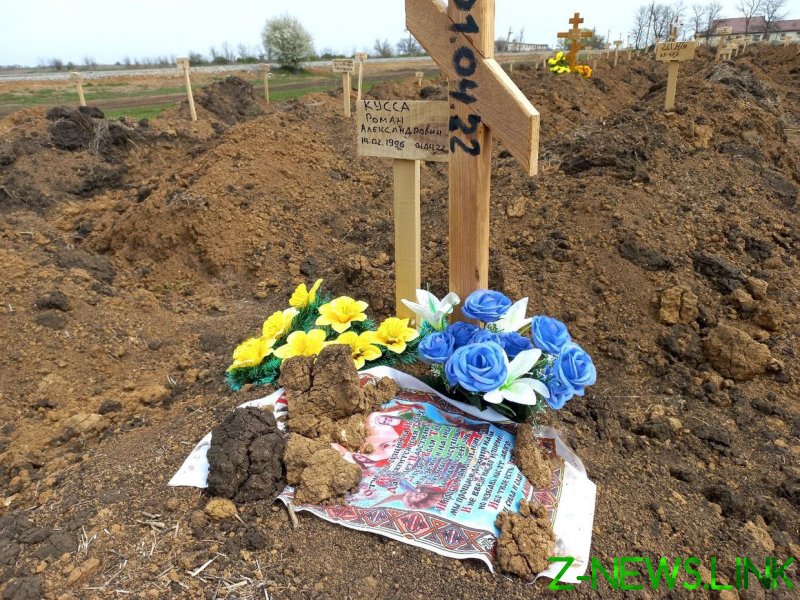 Meanwhile, as Roman noted while walking, mass graves is something Ukraine has previously been accused of. He cited DPR leader Denis Pushilin as having stated that at least 300 such sites have been discovered since 2014.

He also spoke of what he witnessed. “In 2014 or 2015, mass graves were discovered as Azov or Aidar fighters retreated from the Donetsk region. I even saw a woman, she was dug up, she had her arms tied behind her back, she was in the late stages of pregnancy and she had a hole in her head, so that means she was executed.”

American journalist George Eliason, who has lived in Lugansk for many years, has written about these alleged atrocities. In a documentary on the issue, he said: “I’m here for five minutes and then I’m told the first five people they found, it was five decapitated heads. They were all civilians. Who does this to people?”

This story of a mass grave in Mangush is another fake from the Western corporate media, which previously pushed incubator babies being thrown on the floor by Iraqi soldiers, pushed lies about WMDs in Iraq, and carried reports of a chemical attack in Douma that never happened, to name but a few of their litany of hoaxes.

Meanwhile, when I was in Mariupol on April 21 and 22, yes there was destruction – thanks to those Neo-Nazi & regular Ukrainian forces occupying upper floors of residential buildings and using them as military positions, thus drawing return fire on the buildings – but I also saw people in the streets, and the beginning of the cleaning up process before rebuilding can occur.

I’ll repeat what I’ve said on Western media reporting on Syria (which in my experience, from on the ground in that country, is largely dishonest): those who promote these hoaxes and war propaganda have blood on their hands.

After the countless lies emanating from Western corporate media, I would hope people would exercise critical thinking whenever a new claim is pushed, particularly when it is repeated in chorus by the usual suspects.