Home / FUNNY NEWS / Here is the action: the American slipped the potatoes in the box iPhone

Here is the action: the American slipped the potatoes in the box iPhone 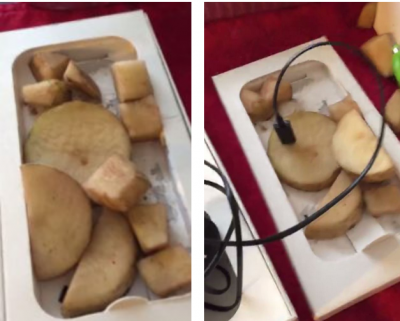 A resident of the USA, who preferred not to be named said that she was tricked by the driver of the black truck with balloons on which was the inscription: “Sale on Black Friday”.

The victim left the house to look at the products offered by this guy.

See also:  New details about iPhone 8 "merged" in the Network

The scammer told her that the phone is already activated. According to women, the gadget was in good condition.

After that she made him call to verify. In the end, everything worked “like clockwork.”

The woman paid the scammer $ 100, took the box with the gadget (as she thought) and went home.

However, at home, the woman was alerted by the fact that the box was too heavy. Her suspicions were confirmed: in the box instead of the long-awaited smartphone was the potatoes (or rather, 11 potatoes).

But as it turned out, the imagination of the fraudster did not stop there. In the box along with the potatoes, the woman also found a charger for Android smartphone.