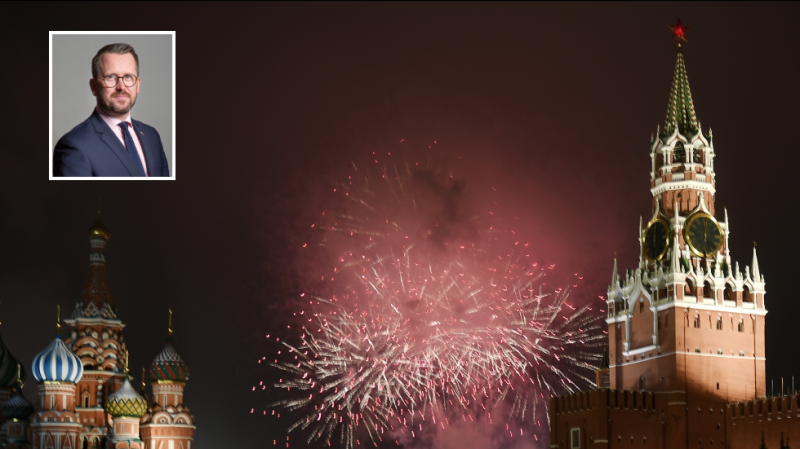 Stewart McDonald’s interest in Russia is quite remarkable. Until 2018, he showed little or no interest in the country at all, but then, following an opaquely funded and organized jolly to Ukraine, he suddenly transformed into an ardent opponent of Moscow. He also became a passionate supporter of the British establishment position on foreign policy. Perhaps it was the chicken Kiev that turned the lawmaker’s head, or maybe something more organized.

During a House of Commons debate on March 25, he demanded UK Cabinet Office minister Michael Gove “arrange a briefing for MPs and political parties, on appropriate terms, with the security services, so we can all better understand the threat [of disinformation] and ensure the integrity of our political discourse and democracy.”

His enquiry was said to be spurred by the release of data by Facebook and Twitter, which alleged that “hostile foreign actors,” such as Iran and Russia, were “spending more money and following more sophisticated methods than ever before when it comes to sowing disinformation” in the UK.

Subsequently, he reiterated his request in a letter to Gove, contending that “state disinformation campaigns… represent a threat to democracies that must be taken more seriously by government, parliament, and society at large.”

While forced to acknowledge that the information published by social media platforms on purported foreign-controlled bot and troll accounts was “relatively small,” he nonetheless contended the negligible data showed “a worrying trend” related to “political matters in Scotland and the UK, across all political divides.”

An elected representative of the Scottish National Party (SNP) placing such faith in the commitment of British intelligence agencies to truth and the defense of democracy may strike some as odd, given the party and the Scottish independence movement more widely have been subject to widespread surveillance, infiltration and disruption by British spooks throughout its existence.

Then again, McDonald isn’t a typical Scottish nationalist. For one, he’s an aggressive supporter of NATO – which his party for 30 years had a dedicated policy of opposing – to the extent of authoring an obsequious article for US State Department house-journal Foreign Policy in March 2021, outlining why an independent Scotland “would be a good ally” and “bring no surprises” to the military alliance.

Moreover, in his position as defense spokesperson for the party’s Westminster contingent, he has cemented a reputation as perhaps Parliament’s most pugnacious critic of the Kremlin in recent years, which is a highly competitive category indeed.

The catalyst for McDonald’s visceral aversion to Moscow seems to be a trip he and his close friend and personal adviser Neal Stewart took to Ukraine in May 2018, which included a visit to Avdiivka, one of the “hotspots” in the ongoing conflict in Donbass.

Oddly, the visit – which would have necessitated protection from both UK and Ukrainian security services at every stage – isn’t noted in his register of members’ interests, and it remains uncertain today who or what funded the sojourn.

It clearly stirred something within McDonald though. Previously, he’d barely mentioned Russia in Parliament, and Ukraine not even once – in the years subsequently, he’s referred to Russia on 28 separate occasions.

Simultaneously, he’s been a consistent and zealous advocate for Kiev in the Commons, making determined lobbying efforts for which he was awarded the Ukrainian Order of Merit by the country’s President Volodymyr Zelensky, in August 2019. Not too bad for 18 months’ work.

Ironically, McDonald’s fixation on “disinformation” may itself similarly have overseas origins. In February 2020, he took an all-expenses-paid seven-day trip to Washington, DC to attend a conference on “combating disinformation online” convened by the Woodrow Wilson International Center for Scholars, a leading globalist think tank.

Not long after, he wrote a fiery op-ed for the Times, alleging that Russia was “infecting the planet with disinformation,” and calling for an “international coalition” to “defeat the virus.”

Such frenzied Russophobic rhetoric is also rife on McDonald’s Twitter account – where he posts about the country almost daily and, in the process, he frequently amplifies the writings and rantings of individuals intimately involved in Integrity Initiative.

McDonald denies having any connection with the organization, yet his aforementioned buddy Neal Stewart has given secret briefings at the offices of its parent ‘charity’, the Institute for Statecraft. Another associate of his, self-styled “Dr.” Jennifer Jones – who in August 2018 falsely accused a large number of online independence supporters of being “bots” – avowedly met with representatives of Integrity Initiative, which she described as “super interesting.”

Furthermore, in May 2020, McDonald outlined plans for “Resilience Scotland” – “a civilian army” to be “deployed at times of national crisis.” The announcement was no doubt music to the ears of Statecraft, as it advocates a number of policies to instill a military ethos at every level of UK society. Conversely, the scheme met with widespread opposition from grassroots SNP activists.

While denying obvious and troubling comparisons with national military service, McDonald acknowledged his proposal was “heavily influenced” by the Modern Deterrence Project (MDP) of the Royal United Services Institute, a think tank with close ties to the UK national security establishment.

MDP chief Elisabeth Braw – former “non-resident senior fellow” at the NATO-connected think tank the Atlantic Council – reportedly liaised directly with McDonald on the plans. This intimate, direct contact further undermines his denials of ties with Integrity Initiative, given she is named as part of the organization’s North American “cluster.”

The SNP MP would have every reason to repudiate a relationship with Integrity Initiative, given its clear hostility to the values of the very movement he supposedly represents.

In March 2018, the organization solicited a confidential briefing on the SNP’s internal dynamics and nationalist figures, groups and factions from prominent Scottish journalist David Leask. Referring to independence movements in other countries as “separatist loons,” he noted “SNP going to Ukraine – to reassure allies they are not pro-Russian.” This insight may well be how McDonald came to the organization’s attention.

Whatever the truth of the matter, three years earlier, Leask dismissed WikiLeaks founder Julian Assange’s suggestion that independence supporters were “right to be paranoid” about MI5 interference in the 2014 independence referendum as a deranged conspiracy theory.

Such a view was far from fringe during the vote itself. In all, 26 percent of Scots believed MI5 was meddling in the 2014 independence referendum campaign to ensure a “no” vote prevailed.

It’s surprising that the figure wasn’t even higher, given the agency is known to have maintained for many years a dedicated section on independence groups and activists, headed by Stella Rimington, who became MI5 director general in 1992. The significant rise in nationalist sentiment in recent years suggests it almost certainly continues to do so.

Agency files declassified in April 2019 confirmed that William Wolfe, SNP leader 1969-1979, party cofounder Compton Mackenzie and radical poet and folk-hero Hamish Henderson, whose writings to this day inspire the movement, were all considered by MI5 as “potentially subversive”, and therefore extensively spied upon.

More sinisterly, in April 1985, SNP activist Willie MacRae died in mysterious circumstances in the Scottish Highlands. As of March 2021, the cause has never been established, medical reports and post-mortem data relating to his death haven’t been publicly released, and there has been no fatal accident inquiry.

Suspicions abound that MacRae was murdered – independent investigations indicate his death likely involved foul play, and he was under surveillance by security services at the time.

It may be significant that in 2015, the same year McDonald was elected to Parliament, British signals intelligence agency GCHQ was quietly authorized to eavesdrop on politicians from the devolved legislatures in Scotland, Wales and Northern Ireland.

The move prompted Scottish First Minister Nicola Sturgeon to urge Whitehall to protect the privacy of parliamentarians in the three nations, entreaties that fell on deaf ears.

McDonald, however, need have no such concerns, given internal guidelines specifically bar the scandalous agency from monitoring MPs at Westminster – such as himself.

The UK government may be much more amenable to the member for Glasgow South’s entreaties. In April 2019, Westminster-based Nationalist MP Stephen Gethins – who has since lost his seat – asked then-secretary of state for foreign and commonwealth affairs Alan Duncan what steps were being taken by Whitehall “to tackle the distribution of disinformation in Ukraine, Belarus and the Baltic States.”

The answer was Open Information Partnership (OIP), which leaked Foreign Office documents have exposed as an avowed “disinformation or troll factory” targeted at Russia, run by an organization staffed by individuals with military and intelligence backgrounds. Perhaps London – and by extension, Scotland – will be getting an OIP of its own. Watch this space.