Home / WORLD / ‘Help is coming’: Conservatives howl as Covid fight-touting Team Biden tells migrant caravans at the border to hang in some more

‘Help is coming’: Conservatives howl as Covid fight-touting Team Biden tells migrant caravans at the border to hang in some more 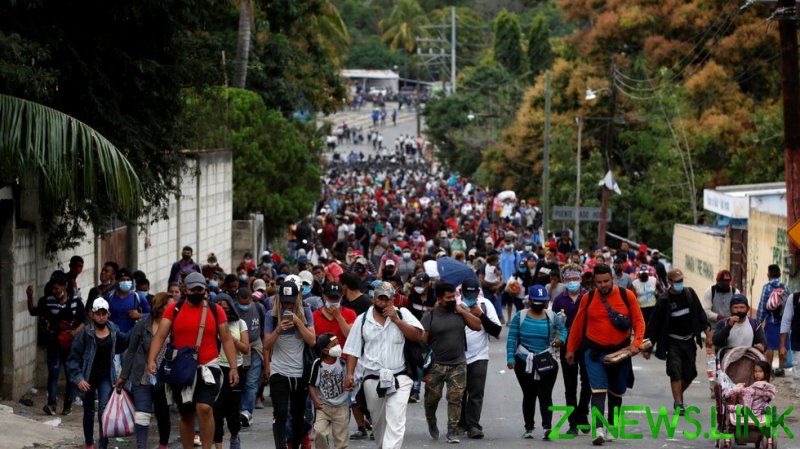 Biden has promised to provide a pathway to citizenship for the millions of illegal aliens already living in the US and to end the strict measures that President Donald Trump put in place to block the influx of new migrants. However, an anonymous transition team official said in a recent interview with NBC News that the new administration won’t be ready to accommodate a huge influx of aliens immediately after Biden takes office on January 20.

“The situation at the border isn’t going to be transformed overnight,” the official, clearly addressing the thousands of US-bound immigrants from Central America, warned, while suggesting that the migrant caravans desperately trying to cross into the US right now just need to wait for an unspecified time.

But just as these clips of violence were spreading on Twitter, Biden spent his day tweeting about the plan to save America from the Covid-19 pandemic, calling wearing a mask “a patriotic act” and citing experts while claiming that “wearing a mask from now until April will save more than 50,000 lives.”

The apparent disconnect between the two plans – one of locking Americans down for their own good, and the other to open the immigration floodgates – was not lost on conservative commenters.

“If you are entering the US by plane after January 26, you need to show that you have tested negative for Covid-19,” surgeon David Samadi said on Twitter. “This applies even to people who have gotten the Covid-19 vaccine already. I assume it doesn’t apply to the caravan.”

“What are you going to do the stop the unmasked, untested caravan that’s making its way to our country?” conservative activist Scott Presler asked Biden. “This is a national security risk.”

Documentary producer Jack Coco tweeted a video of migrants bursting through the Guatemalan border and trampling each other, sarcastically quipping, “Socially distanced caravan en route to America from Honduras. I’m sure everyone has been vaccinated, so it’s all good.”

Other observers pointed out that after fighting Trump’s efforts to build a wall to protect the nation’s southern border, Democrats welcomed the non-scalable fences erected around the Capitol to protect politicians from protesters.

Before Trump’s reforms, illegal aliens could count on being set free into the US interior while waiting for months or even years for their hearings in immigration court. Many simply disappeared and didn’t show up for their court hearings. Biden plans to end such rules as keeping migrants in Mexico while they await their court hearings in the US and limiting the number of asylum applications each day.