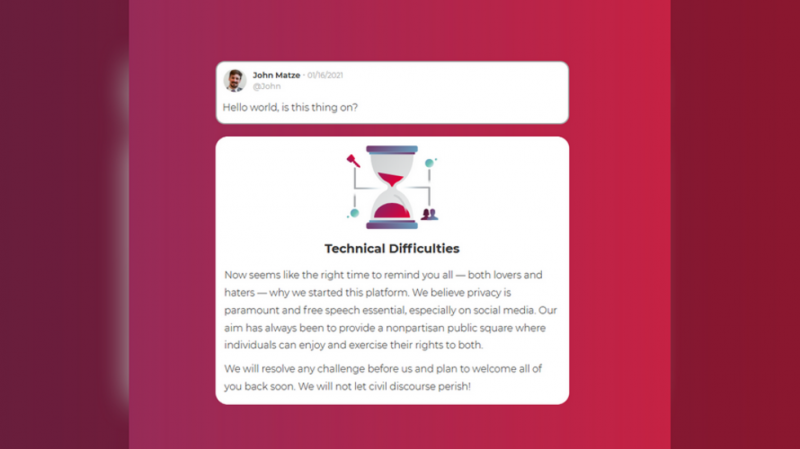 “Hello world, is this thing on?” Parler chief executive John Matze quipped in a message that appeared as the company’s website resurfaced on Sunday, marking its first sighting since being shut down a week ago, when Amazon terminated its web-hosting services.

“Now seems like the right time to remind you all – both lovers and haters – why we started this platform,” Matze added. “We believe privacy is paramount and free speech essential, especially on social media. Our aim has always been to provide a nonpartisan public square where individuals can enjoy and exercise their rights to both. We will resolve any challenge before us and plan to welcome all of you back soon. We will not let civil discourse perish.”

The company offered no details on its restoration plans or timeline for resuming service. According to the WHOIS internet database, it’s being hosted by Epik, the same platform that carries server traffic for Gab and 8chan.

Parler hasn’t commented on its new hosting service, and Epik issued a statement on January 11 saying that as of then, it hadn’t been contacted by the social media company. At the same time, Epik spoke out against de-platforming companies like Parler and their users.

“It is becoming increasingly easy to demonize anyone who has different beliefs with no recognition of the actual effects and impact this can have on society,” the company said, taking aim at the tech giant’s move to drop Parler.

Parler’s Matze has said the company was almost simultaneously cut off by a wide range of service providers after some of its users were involved in the January 6 assault on the US Capitol by election-fraud protesters, and competing providers declined to fill the void. Google and Apple both removed the Parler from their app stores, while Amazon Web Services banned the company from using its servers, citing its refusal to remove content that threatens public safety.

Parler, although it is particularly favoured by conservatives, wasn’t the only place where far-right protesters discussed their plans. Many used mainstream platforms, such as Twitter, Facebook and YouTube – none of which was canceled as a result.

Matze had to flee his home and take his family into hiding because of death threats, and many Twitter users reacted to reports of Parler’s new hosting service by calling for shutting down Epik.

“Epik should be sued and held punitively liable for their part in sedition,” one commenter said. “Hit them financially if they are morally bankrupt.”