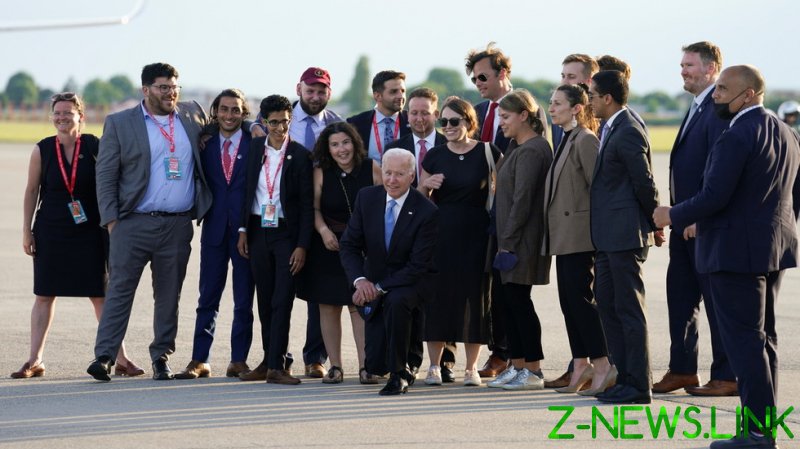 Steve Ricchetti, described as one of President Joe Biden’s “most trusted advisers,” has three children working for the current administration and a lobbyist brother, the Washington Post revealed on Friday. Press secretary Jen Psaki’s sister, wife of chief of staff Ron Klain, and daughter of deputy chief of staff Bruce Reed were also named in the article, which includes quotes from Schaub.

“This is ridiculous,” Schaub lamented on Twitter later in the day, even as most of the federal government was shut down for the newly created Juneteenth holiday. He described himself as “disgusted” at the situation that “royally sucks.”

He dismissed the White House’s defense that all of the people involved met qualifications for their posts, saying that Biden had promised diversity, but is instead “giving these privileged white kids with connected mommies and daddies prime jobs over others!”

Parents didn’t have to be involved, he added, as the head of the Presidential Personnel Office “knew the score.” That would be Catherine Russell, formerly Jill Biden’s chief of staff during the Obama administration – married to Obama’s former national security advisor Tom Donilon, whose brother Mike is Biden’s chief adviser currently.

“Do I sound bitter? Hell yeah, I’m bitter. I’m the stupid moron who fell for his false promises,” Schaub lamented. “Boy was I stupid.”

It wasn’t just the nepotism that bothered Schaub, either. He brought up the “golden parachute ban” on executives that amounted to a “sham prohibition” that’s easy to dodge. It was also fine to accept payments from news channels – something he denounced when it came to Fox News and the Donald Trump administration. There was also a dodge for appointees working on matters involving former employers and clients that paid for speeches – such as Treasury Secretary Janet Yellen.

A milk lobbyist is running the Department of Agriculture, a “shadow lobbyist” running State Department, a Raytheon board member in charge of the Pentagon, and “private equity fund” people at both the White House and State, Schaub continued. “And personnel is policy.”

Such “little problems” are signs of “much bigger rot,” he added.

At one point Schaub even lamented the absence of Norm Eisen – Barack Obama’s ‘ethics czar’ who went on to help the Democrats impeach Trump and “fortify” the 2020 election – saying that Biden “could have found someone like Norm – only this time maybe someone not white and male for a change – to champion ethics” in this administration.

“So, yeah. I’m disappointed. I’m angry. I supported this guy. I provided help to the campaign and the transition because I believed ethics was going to be a priority. Well, it isn’t even in the top 100 things the administration cares about,” he said.

Schaub was appointed by Obama to head the US Office of Government Ethics in January 2013, and resigned in July 2017 after clashing with the Trump White House. He currently works for the Project for Government Oversight (POGO) in Washington.

While Schaub became somewhat of a celebrity among the online #Resistance Democrats, they seemed to have very little sympathy for his outburst on Friday. The majority of responses quoted official White House denials from the Post story and the paper’s own disclaimers about qualifications.

One even suggested that Schaub is “bitter” about not getting hired himself, and was behaving like a “classic white man thinking he is owed a job and mad that he didn’t get it.”

Another commented that Schaub was getting worked up over a “non-scandal” and that it seemed like he was “addicted to the drama of the previous administration.”

Democrats have reflexively defended Biden from nepotism charges after Trump and the Republicans brought up the issue of his son Hunter doing business in Ukraine and China while Biden was Obama’s vice-president. Any talk of this was dismissed as “Russian disinformation” during the 2020 election. Now even the Post story acknowledged Hunter’s “foreign business deals” but described them as “a distraction” during the campaign.