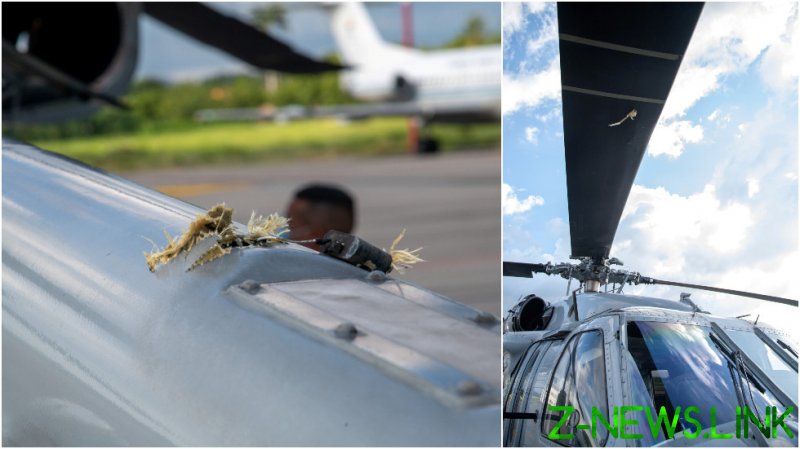 The incident unfolded near the Camilo Daza airport in the city of Cucuta on Friday as Duque and other officials returned from a meeting in a nearby town, according to local media reports. The president himself confirmed the attack later on Friday, stating that he had “instructed the security forces to go after those who shot at the aircraft and put lives at risk.”

“It was a cowardly attack. As a government we are not going to falter for a single minute, not a single day, in the fight against drug trafficking, terrorism and against organized crime groups that operate in the country,” Duque’s statement continued.

Colombia is always strong in the face of crime and our institutions are above any threat.

Unconfirmed footage has emerged online purporting to show the moment the helicopter came under attack, with what sounds like small arms fire ringing out some distance away as the craft passed overhead. Other photos and videos circulating in local media captured the state of the helicopter afterward, showing several holes punched in the vehicle, including in one of its propellers and a panel covering its engine.

Nobody was injured in the assault and the craft was able to land without incident, the president’s office confirmed, though media reports said the chopper was struck five or six times. In addition to Duque, the helicopter also carried Defense Minister Diego Molano and Interior Minister Daniel Palacios, as well as Silvano Serrano, governor of Norte de Santander, and Cucuta Mayor Jairo Yanez.

As authorities investigate the attack and search for suspects, all flights at the Camilo Daza airport were suspended, El Spectador reported. So far, no individual or organization has claimed responsibility for the helicopter attack, nor have officials pinned blame on any actor.

At the time of the incident, Duque and the other officials were returning from a visit to the town of Sardinata to discuss local investment projects and the fight against drug trafficking in the region. Several criminal groups are known to operate in Norte de Santander state, where both Cucuta and Sardinata are located, as well as remnants of the FARC rebel faction and active cells of the ELN, another armed guerilla group.

While FARC, or the Revolutionary Armed Forces of Colombia, struck a major peace deal with the government in 2016 and agreed to lay down its arms after decades of fighting, break-off factions continue to operate in rural areas of Colombia, particularly in Norte de Santander, which borders Venezuela.

The helicopter attack follows a series of intense protests across the country, sparked off in late April by a controversial tax reform introduced by Duque. While the proposal has since been withdrawn, demonstrations continued over the government’s response to prior rallies, which saw more than a dozen protesters killed in clashes with riot police. Two officers and one police detective also lost their lives in the unrest, according to Human Rights Watch.

While protest organizers declared an end to the regular demonstrations last week, a major union leader warned on Thursday that they could reignite if the government did not meet protesters’ demands, which center on economic reforms for low-income communities, as well as charges of police brutality.

Friday’s apparent shoot-down attempt also comes after two car bombs were detonated outside a military facility in Cucuta earlier this month, leaving 36 injured, including two American military advisers stationed at the base. While Defense Minister Molano said the government’s “initial hypothesis” pointed toward ELN involvement, the rebel group later denied any role in the attack.