Home / Game / Hearthstone will be a large extension

Hearthstone will be a large extension 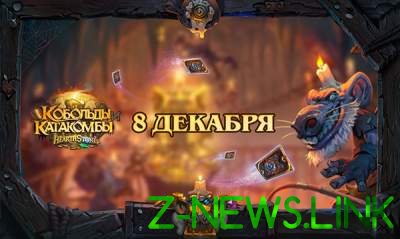 “The kobolds and catacombs” will start in Hearthstone on December 8th.

Soon Hearthstone will appear in the next big expansion — “the Kobolds and catacombs”. Blizzard Entertainment has announced the exact release date, and in parallel gave an interview in which she explained some peculiarities of the development of the game.

“The kobolds and catacombs” will start in Hearthstone on December 8th. Recall that the expansion contains 135 new maps, new perks, weapons and single player mode “Campaign dungeon” — a kind of “bagel” with randomly generated tests. More info can be found here.

Meanwhile, the portal Metabomb published an interview with two members of the Hearthstone team: lead artist Ben Thompson (Ben Thompson) and game designer Peter Valena (Peter Whalen). The developers have confirmed that in the foreseeable future are not going to release Hearthstone for new adventures. According to them, the problem is lurking in misplaced emphasis.

Earlier in the adventure was handing out unique cards from the Supplement. Blizzard collected the test so that the mass, the player was able to finish. Otherwise he would not have received new cards and was upset. So the complexity of the adventure had to lower. But this, in turn, was a disappointment to seasoned gamblers who wanted something pahardcore.

In the end, Blizzard decided not to chase two hares and started to produce together with add-ons “content mission” — a kind of smaller version of the adventure. While completing missions will no longer give unique maps such supplements if you are not interested in (or you can’t get to them), you won’t miss any gameplay possibilities.

Analogue “content missions” in the “Kobolds and the catacombs” — the “minions”. There you can get a special shirt, but not the map. Without having to watch inexperienced players, Blizzard could make a “Campaign dungeon” is quite toothy.

Finally, the developers have confirmed for 2018 for Hearthstone will release three more extensions. It is planned that each of the extensions, too, will be “content with the missions.”