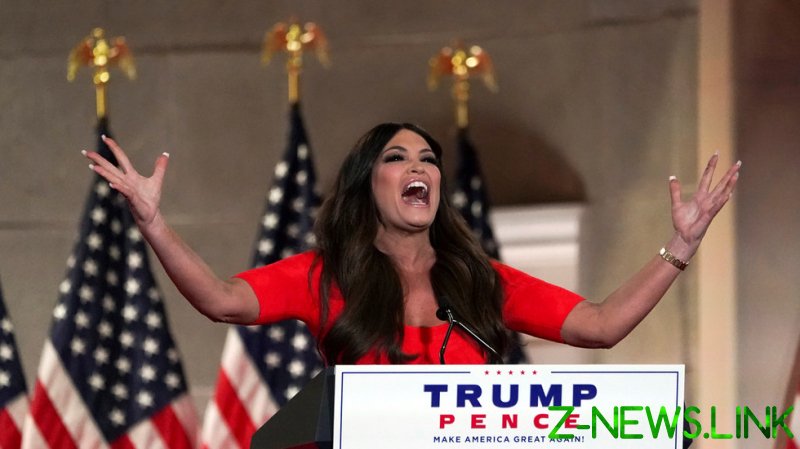 Guilfoyle, former host of Fox’s ‘The Five’ and the girlfriend of Donald Trump Jr, took the stage on the first night of the Republican National Convention on Monday, where she addressed a virtual audience due to coronavirus concerns.

“Don’t let the Democrats take you for granted. Don’t let them step on you,” she boomed to an empty hall, closing the speech with a promise for a second Trump term: “Ladies and gentlemen, leaders and fighters for freedom and liberty and the American dream, the best is yet to come!”

Though her address was somewhat standard for a Republican convention, hitting on themes of ‘American exceptionalism’ and offering a full-throated endorsement of President Trump, netizens couldn’t help but point out the volume of Guilfoyle’s address, which frequently escalated into outright shouting.

“Thank God. I thought my cat was stuck in a blender. It was just Kimberly Guilfoyle’s screeching speech,” one user joked, while another offered a single word of advice: “decaf.”

The former pundit’s delivery drew comparisons to North Korean news presenter Ri Chun-hee – known for her passionate, and at times aggressive, newscasts – some suggesting she was doing an “impression.”

The speech found its supporters, however, even in unlikely places, as one critic noted that last week’s Democratic convention didn’t have “a tenth of the energy” Guilfoyle brought to the Republican event.

A number of conservatives weighed in favorably as well, including Don Jr – perhaps for obvious reasons – while another supporter described the speech as “very passionate,” though noted “she seemed louder” than other speakers.