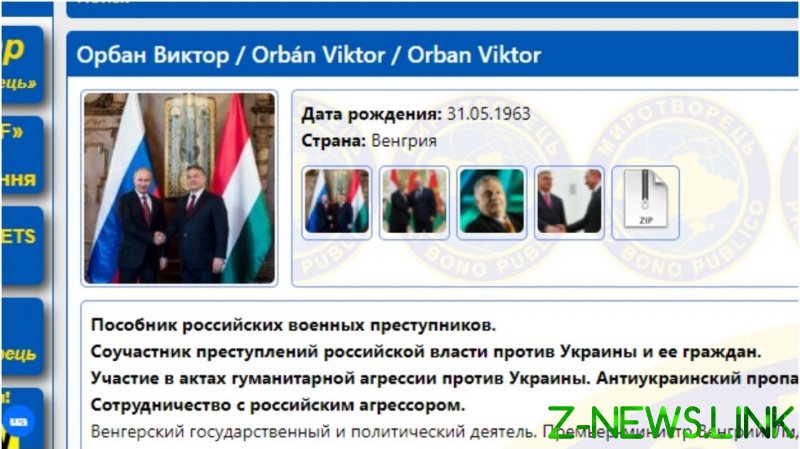 Hungarian Prime Minister Viktor Orban has been added to the notorious online database pro-Kiev activists use to blacklist people they consider enemies of Ukraine.

The Mirotvorets (‘Peacemaker’) website was created in 2014 as a public database of “pro-Russian terrorists, separatists, mercenaries, war criminals, and murderers.” It contains links to social media accounts and personal information, such as home addresses, phones, and emails.

Orban is listed as “an accomplice of Russian war criminals,” and an “anti-Ukrainian propagandist.” The website mentioned that the Hungarian PM refused to back an embargo on Russian oil and gas, among other things. He also broke ranks in the EU by refusing to send weapons to Ukraine or allow the transit of foreign weapons to Ukraine through Hungarian territory.

Orban, who won re-election last month, built his campaign around promises to keep his country out of the Russia-Ukraine conflict and, in a victory speech, named Ukrainian President Volodymyr Zelensky as one of his “opponents.” 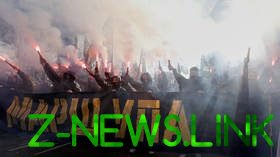 Zelensky singled out Hungary during a video chat with the European Council in March. “You must decide for yourself whose side you are on … Listen, Viktor, do you know what’s happening in Mariupol?” Zelensky said.

The Mirotvorets project gained notoriety in 2015, when writer and historian Oles Buzina and politician Oleg Kalashnikov were assassinated in Ukraine after their profiles appeared on the website.

In 2016, EU officials and journalist groups condemned Mirotvorets for leaking data on more than 4,000 media staff members and accusing them of “collaborating with terrorists” for reporting from eastern Ukraine.

Throughout the years, the website has blacklisted several Europeans, including former German chancellor Gerhard Schroeder and German diplomat Wolfgang Ischinger.

Russia attacked Ukraine in late February, following Kiev’s failure to implement the terms of the Minsk agreements, first signed in 2014, and Moscow’s eventual recognition of the Donbass republics of Donetsk and Lugansk. The German and French brokered Minsk Protocol was designed to give the breakaway regions special status within the Ukrainian state.