Home / WORLD / ‘He is not a Covid denier’: Germany boss insists controversial star ‘does not belong to lateral thinkers and conspiracy theorists’

‘He is not a Covid denier’: Germany boss insists controversial star ‘does not belong to lateral thinkers and conspiracy theorists’ 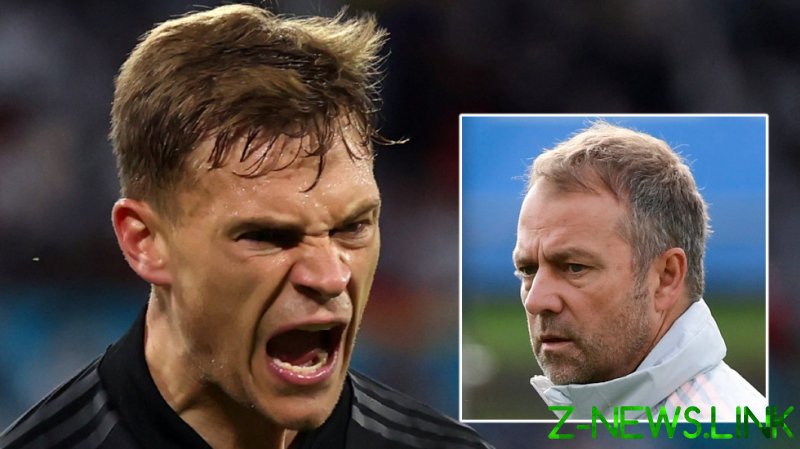 Before kick-off, a Bild article alleged that he was one of five Bayern stars refusing to get the vaccine despite team coach Julian Nagelsmann being forced to work from home after contracting the virus, so the 26-year-old was inevitably probed on the matter.

“I have concerns about the lack of long-term studies. I am of course aware of my responsibility. I follow all hygiene measures and get tested every two to three days. Everyone should make the decision for themselves,” Kimmich said, at the start of comments that were widely-derided.

In March last year, as the pandemic kicked off, Kimmich began an initiative with Bayern teammate Leon Goretzka to offer support to social and charity organizations for those that had fallen on hard times.

“Solidarity is necessary because health is the most important thing, everyone can help,” Kimmich told the WeKickCorona website.

Kimmich insisted that “doesn’t mean I don’t practice what I preach”.

“We’ve donated money to Unicef so that they can make vaccines available in countries with no access to vaccines. If people decide they want to get vaccinated, we should do all we can to ensure that they can,” he added to Sky.

“I find it a shame that there is only vaccinated and nonvaccinated in this debate. Nonvaccinated then seems to equal [to being a] Corona denier or anti-vaxxer.

“But there are other people who just have concerns, whatever their reasons, and I think we should respect that as long as they also stick to the measures.

“I’m not saying categorically that I won’t get vaccinated, I just still have some concerns. It is absolutely possible that I will get vaccinated in future.”

Speaking to Frankfurter Allgemeine, Die Mannschaft coach Flick, who took over from World Cup winner Joachim Low in August following Euro 2020, confirmed that he is vaccinated and “supported the DFB’s vaccination campaign out of conviction”.

“It would be ideal if every player was vaccinated,” he admitted.

“But for me, limits are crossed when people are insulted and put in a certain corner where they don’t belong.”

Knowing Kimmich well even before he took the Germany job after winning the treble with him last season in Bavaria, Flick said the player should not be enduring criticism over his views.

“Even though Jo is unvaccinated, he is not a Covid denier,” Flick claimed.

“He does not belong to lateral thinkers and conspiracy theorists.

“Anyone who knows Jo knows how he is. He questions everything, he is very interested, [and he] always wants to know and understand all the interrelationships.”

On the same day that Kimmich made his remarks, Bayern legend Thomas Muller also defended him.

“Me, personally, I’m a friend of vaccination,” he revealed to Sky.

“I hope the players who have not yet been vaccinated will change their minds. Ultimately, we all want to get out of this corona phase.

“As far as I know, vaccination is the best way for that. Nevertheless, we have to try to respect that [Kimmich’s stance and decision].

“It’s a fine line, an ethical or a moral discussion – the decision is understandable from a human point of view.”