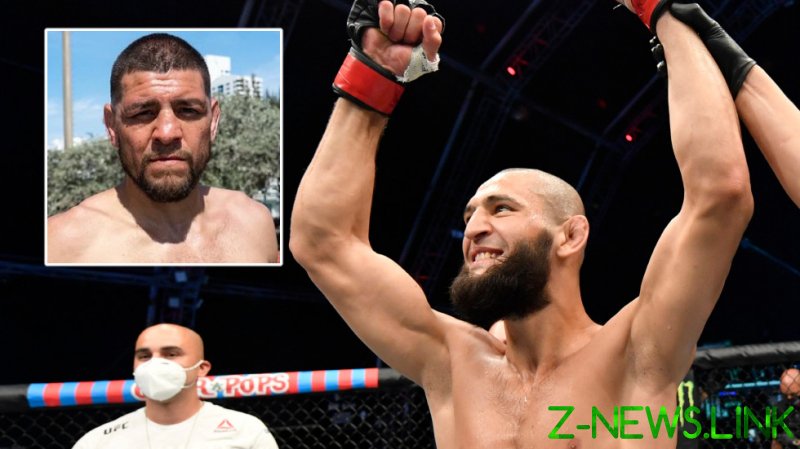 Fight fans had been licking their chops at the prospect of the elder Diaz brother taking on the highly-rated Chimaev in what would be the former Strikeforce welterweight champion’s first fight in more than six years, but any chance of it becoming a reality appears to be dead in the water following comments from Diaz’s manager, Kevin Mubenga.

“He’s a good prospect, respectfully, but he hasn’t earned the right to a mega-fight vs. Nick Diaz,” Mubenga sold ESPN.

“So let’s put those rumors to rest.“

After a blistering start to his UFC career which saw him rack up two wins in his first ten days with the company in two weight classes, as well as a one-shot knockout of the experienced Gerald Meerschaert just weeks later, Chimaev’s ascent up the welterweight rankings has stalled somewhat.

The Chechen-born Swede was slated to face top welterweight contender Leon Edwards in December but that fight hit a series of road bumps with both men being diagnosed with Covid-19. Chimaev’s, though, appeared to be more serious  leading to speculation that the undefeated fighter was considering retirement.

That sentiment quickly passed, however, with Chimaev targeting a summer return to the Octagon – and Diaz, he said, was an ideal opponent.

“I want to fight him,” Chimaev told MMA Junkie of Diaz. “That will be good. I watched his fight when I was a kid and now I’m going to fight with him. Perfect for me. I like it. I want to see who is the real gangster. I think he is a real gangster in this sport, but we’ll see.“

As for the identity of Diaz’s eventual comeback opponent, Mubenga says their team’s sole focus is Nate Diaz’s upcoming showdown with the tough Englishman Edwards.

“Nate’s up first; our focus is on that,” Mubenga added. “We will narrow down more deserving opponents (for Nick) after the fight.”

A win for Chimaev against the legendary Diaz would have ignited his reputation once more after his heroics on ‘Fight Island’ last summer. But judging by the reticence of some of the UFC’s top welterweight names in taking on the undefeated fighter Chimaev may just have to take the scenic route towards the top of the UFC’s 170lbs fold.