Home / WORLD / ‘He choked on his blood’: Russian UFC star Alexander Volkov reveals opponent was struggling to breathe after he ‘smashed his face’

‘He choked on his blood’: Russian UFC star Alexander Volkov reveals opponent was struggling to breathe after he ‘smashed his face’ 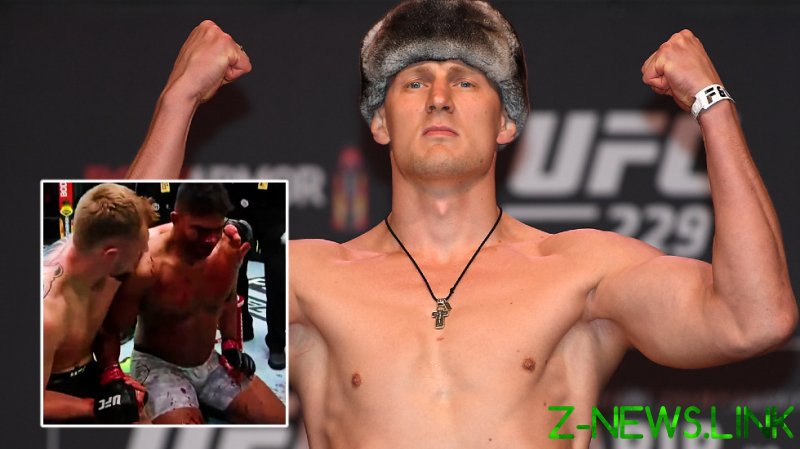 “The Demolition Man” sunk to the floor after copping more than a round of painful punishment from hard-hitting Volkov at UFC Vegas 18, when the Moscow-based powerhouse noticed that he had been trying to gulp down air as he bled profusely in the octagon.

Volkov admitted that he had been “shocked” by Overeem’s first attack, adding that the well-timed early assault had not “shaken his spirit” or intimidated him as he exacted a brutal response.

“In the end, it turned out [that I was able to] smash his face so that he choked on the blood,” Volkov told Sport24, reflecting on his shuddering knockout victory.

“Take any person and hit him with 20 or 30 blows on the head. I think after this anyone would be out of shape.

“If you look at his training camp, he brought in many guys like me: two meters tall, hitting [hard]. He studied me seriously.

“It’s just that Alistair didn’t calculate that I would hit with my hands so hard and sharply, breaking through his defense.

“In fact, from the beginning of the first round it was hard for me. I even doubted myself.

“In my opinion, he came out in good shape and was waiting for my mistake. Several times I came close to getting it wrong.”

Volkov is hoping for a title shot after the impressive victory, which 40-year-old Overeem praised in a statement after his tactics ultimately failed.

“I was a little at a loss as it was not possible to implement the plan from the very beginning,” conceded Volkov.

“I wanted to work more with my legs on the body, on the head, but he studied me well and successfully blocked all my attempts.

“I understood that the less I give him the opportunity to move and think, the easier it would be, so I tried to constantly throw punches. This led to the result.”

The 32-year-old shared a photo from hospital after the fight as evidence that he had not fractured his leg.

“Thank you all for your congratulations,” he told his fans. “I will not be able to answer all your messages.

“I have arrived at the hospital after the fight. I’m fine, I just split my leg a little. I am completely in good condition, happy with the victory, happy with how the fight went.”