Home / WORLD / HBO’s new series ‘The Prince’ is vicious & derivative, but it deservedly cuts the British royal family down to size

HBO’s new series ‘The Prince’ is vicious & derivative, but it deservedly cuts the British royal family down to size 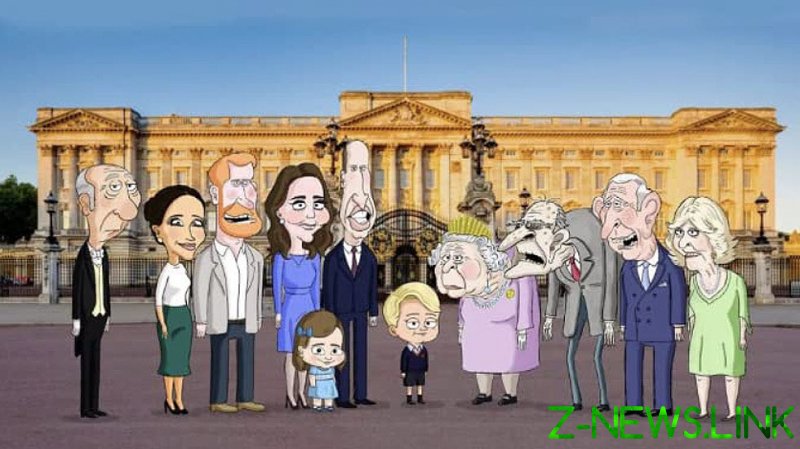 HBO’s new aggressively irreverent animated series ‘The Prince’, which debuted on HBO Max on July 29, sets its comedy sights on the target-rich environment of the British royal family, and relentlessly fires a ferocious fusillade of mockery at the monarchy.

After watching ‘The Prince’, which savagely lampoons all of the royals, I don’t think that deferential gesture will ease any hurt feelings among the Windsors.

The show’s caricatures of the royals are relentless and vicious. For instance, the Queen is a cruel, foul-mouthed, farting crime boss, and Prince Philip a decrepit near-cadaver.

Prince Charles is a spineless, big-eared, mealy mouthed coward who berates his bride Camilla, a horse-faced mute, to get in the good graces of his mother.

Prince William and his wine-hound wife Kate are absolutely miserable and headed for divorce, are indifferent parents, and are incapable of doing even the most intimate of things without servants.

Prince Harry and Meghan Markle are two of the more hysterical portrayals on the show, maybe because the caricatures of them seem more realistic due to their being such cartoonish people in real life.

On ‘The Prince’, the two of them are living in Melrose Place in Hollywood, and they are subtly cross-eyed, which for some reason made me chuckle.

Meghan is a talentless actress and social climber leading her clueless husband around by the nose, while Harry (voiced by an utterly brilliant Orlando Bloom) is such a dolt that he cannot remember the name, or gender, of his baby, is astonished by the magic of refrigerators, and is so dumb as to be virtually unemployable.

That doesn’t stop him from trying, though, as he reveals to Meghan that as a little boy he dreamt of being a massage therapist – to which she replies that as a little girl she, too, had a dream… of being a princess. A dead-eyed Harry then declares, “You kinda f**ked that up.” Yes, she did.

Meghan’s acting failures lead her and Harry to the Hollywood gutter of reality TV and ‘The Real Housewives of Beverly Hills’, and then she brings reality TV to the royals, which culminates in a fistfight between the Queen and Lisa Rinna over a perceived slight on Ms. Rinna’s husband, Harry Hamlin.

Then there’s Meghan and Harry’s HGTV show ‘Royally Screwed’, where they try and fix up houses on a budget for regular people. It goes about as well as you’d expect.

Considering the roasting Harry and Meghan receive on ‘The Prince’, it’s no surprise that the show is on HBO as opposed to Netflix, as they have a deal with the latter – rumored to be worth $100 million – and would no doubt flex their royal muscles to squash the series and ‘protect their brand’ if given the chance.

The main protagonist of ‘The Prince’, though, is Prince George, the eight-year-old son of Prince William and the Duchess of Cambridge, who is third in line to the throne. He is portrayed as an effeminate and obliviously, obnoxiously entitled child.

Prince George is basically Stewie Griffin from ‘Family Guy’, but just a few years older – which should come as no surprise, since the creator of ‘The Prince’is Gary Janetti, a writer for ‘Family Guy’.

And that is the biggest problem with ‘The Prince’: that it’s obviously derivative of ‘Family Guy’.

It follows the same formula, with children acting like adults, adults acting like children, and an extended musical number; and when mixed with Machiavellian palace intrigue, it all feels like ‘Family Guy Goes to Buckingham Palace’.

That’s not to say that the show isn’t funny, just that it isn’t original.

Some have been offended that ‘The Prince’ is targeting a real-life eight-year-old, Prince George, with its comedy, and I suppose there’s some legitimacy to that. William and Kate are certainly displeased with the show, but to be honest – and maybe this is the Irish in me – I’ve a very hard time accepting a British royal, regardless of age, as a victim in any circumstance. It’s like with the Oscar winning movie ‘The King’s Speech’, where we’re supposed to feel bad for King George VI because he’s some stuttering, muttering jackass. No thank you.

Overall, ‘The Prince’ is a mindless, quick watch. The episodes are short, don’t ask for much mental effort, and occasionally make you laugh… there are worse things in life. While it certainly could’ve been better, I also found it to be funny often enough.

The best way to judge if ‘The Prince’ is worth watching is to answer the question, do you like ‘Family Guy’? If ‘Family Guy’ is a bridge too far for you, then ‘The Prince’ is not a journey worth taking. But if you like exceedingly irreverent comedic shots taken at all things royal, then‘The Prince’ may very well be your cup of tea.