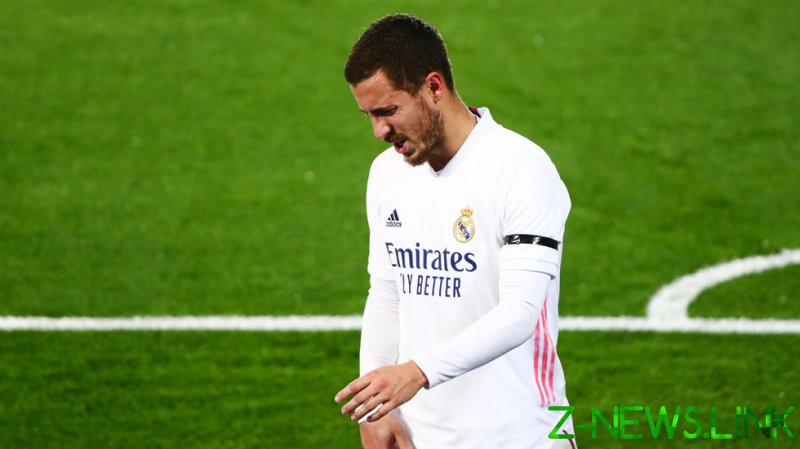 Hazard was plucked from the Premier League to become Real Madrid’s latest ‘Galactico’ prior to the start of last season after seven largely successful seasons with Chelsea, but what was initially a dream move for the Belgian maestro has turned into something more resembling a nightmare after repeated injury misery has limited his appearances to just 36 over the course of his spell at the Bernabeu to date.

The Belgian, who is Real Madrid’s all-time most expensive signing, made his first appearance since January from the bench during Madrid 2-1 against Elche on Saturday but just when it seemed that Hazard was clear of the treatment table, head coach Zinedine Zidane confirmed in a press conference Monday that Hazard has suffered another setback, this time a “muscle injury in the right pelvis“.

It was clear from the presser that Zidane was as mystified as anyone about Hazard’s injury woes. He indicated that there are “things I cannot explain” in relation to the player’s continued fitness troubles – even suggesting that Hazard’s mindset could be a factor, saying that his problems might be connected to “things up here in the head, which influences a lot“.

Hazard has been restricted to just 14 first team appearances this season and 36 in total since his €100 million move from Stamford Bridge. The contrast between his spell at Chelsea and in Madrid is stark; he was rarely injured in seven seasons in West London. In Madrid, the opposite has become true.

“Like always I try to stay positive and hope it will be a little thing,” Zidane explained. “Something is happening. He is a player who was never injured in his career. We want to help him.”

However, a clearly aggravated Zidane grew weary when attention turned to the Real Madrid medical steam who, for one reason or another, have been unable to nurse the player to full health for any prolonged period.

“I don’t think there is a problem, we have very competent people here, who are close to the players every day,” Zidane shot back.

“We are trying to find out what is happening with the injured players, there are things that happen in football. We have spoken about the pre-season, about the number of games.”

Whatever the reason for his fitness problems, it is difficult to describe Hazard’s Real Madrid stint as anything other than a disaster up to this point. He was drafted into the team with a flawless reputation following his time with Chelsea, where he was a four-time Player of the Year.

So impressive was he towards the end of his Chelsea career that many observers predicted that he was poised to take over the mantle from the likes of Cristiano Ronaldo and Lionel Messi – but this is a prophecy that looks to continue being unfulfilled as the superstar Belgian’s injury woes continue.