‘Have you stopped drinking cognac in the morning?’: Russian pop star Buzova left in tears by bizarre Euro 2020 interview (VIDEO) 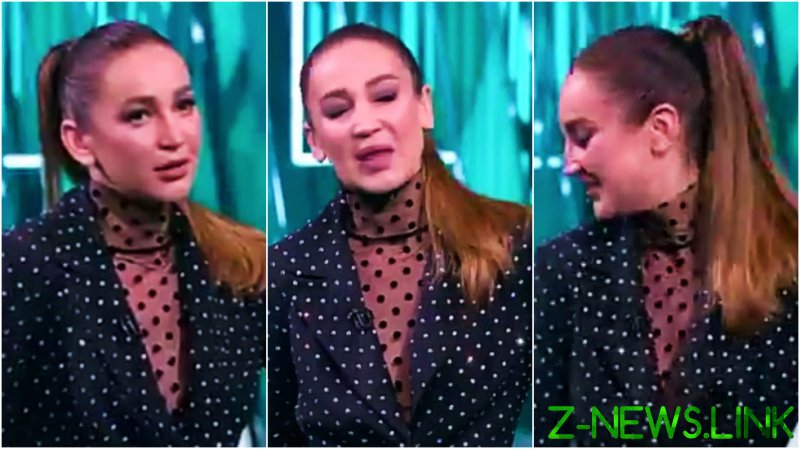 Buzova, formerly the wife of ex-Russian international Dmitri Tarasov, was invited onto the television network to discuss the Russian national team’s fortunes at the European Championships, and if fans can remain hopeful that Stanislav Cherchesov’s men can emerge from a tricky Group B after defeat in their opening game in St. Petersburg to the world’s top-ranked team, Belgium.

Russia were routed in their showdown with the Red Devils, with a brace from Inter Milan striker Romelu Lukaku and a single strike from Thomas Meunier proving to be the difference between the two sides – and what began as a discussion about footballing matters between Buzova and Guberniev soon descended into something more resembling a farce.

The fiery exchange kicked off when Buzova appeared to take umbrage at the tone of question aimed at her which, on the surface at least, appeared designed to highlight any gaps in her historical knowledge of Russian football.

“Stop flaunting knowledge. I understand that in 10 seconds you need to show that you are educated, that you know these names. I am for Russia, I am for athletes, I am for football,” Buzova shot back.

Guberniev, now simmering, bellowed that he “asked [her] a question“, leading to Buzova accusing the television host of being “rude“.

“If you are a man, you will not interrupt me,” came Buzova’s riposte. “You asked a question and did not give me, a girl, an answer. Rudeness! I demand respect.”

Tensions quickly raised further, with Guberniev jumping headlong into asking Buzova if she had a drinking problem – which prompted tears form the 35-year-old singer.

Guberniev persisted with this line of questioning – prompting further furious backlash from Buzova.

“I knew it would end this way,” the exasperated star then said. “It’s impossible! [This] person, [this man has been insulting me for so many years. I came to support the Russian national team … Cognac ?! Show you my figure ?! Are you kidding me?! I don’t drink, I’m not allowed! I am now being treated… I underwent a very complicated operation! I will not allow more, I will never come here again!

“I don’t believe a single word of yours,” she later added. “You burn when you say what is read in your ear. I am for Russia. For a brave Russia that is not afraid of anything. And I am for sports and for our players, who, unfortunately, relaxed [against Belgium], they did not have enough speed.

“I am a St. Petersburg girl, we have been rooting for football all our lives, I grew up on football, on English and on German. We’ve been rooting for Zenit since childhood. I am for sports and I am for football. I think that our guys just need to believe in themselves. And when some, like some, appear and throw their stones and do not believe in them, then people can break.“