Home / WORLD / Have the balls to admit we’re more than walking wombs: PA rep’s joke bill is too close to reality for humor in police-state 2021

Have the balls to admit we’re more than walking wombs: PA rep’s joke bill is too close to reality for humor in police-state 2021 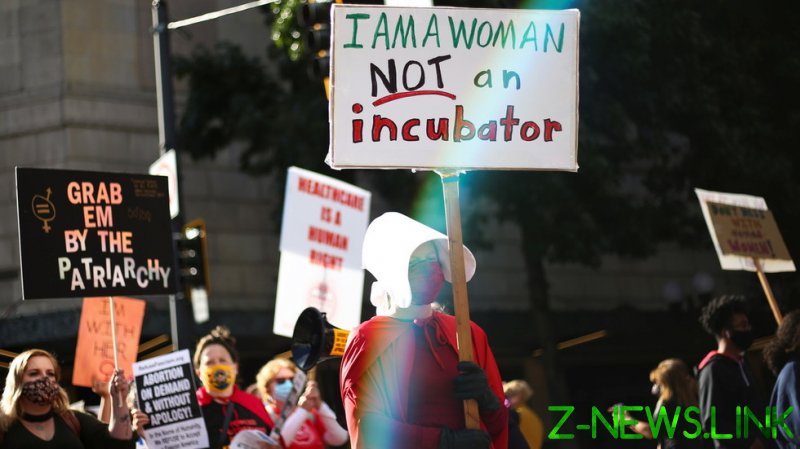 Rep. Christopher Rabb (D) released a memo on Saturday calling for “all inseminators to undergo vasectomies within six weeks from having their third child or 40th birthday, whichever comes first,” and added a “$10,000 reward for reporting to the proper authorities those scofflaws who have not complied with this statute within the allotted time frame.”

“As long as state legislatures continue to restrict the reproductive rights of cis women, trans men and non-binary people, there should be laws that address the responsibility of men who impregnate them,” the memo continues, going on to codify ‘wrongful conception’ to include when a person has demonstrated “negligence toward preventing conception during intercourse” and stressing that the new legislation would “allow Pennsylvanians to take civil action for unwanted pregnancies against inseminators who wrongfully conceive a child with them.”

The language is clearly meant to mirror that of the Texas abortion ban which passed last month to widespread outrage among liberal Americans, particularly the mention of a $10,000 reward for self-righteous snitches. In Texas’ case, the ‘bounty’ applies to the apprehension of any citizen who “aids or abets” an abortion – including but not limited to the friend or taxi driver who ferried the woman to the clinic – but not the woman herself.

Many on the Right were predictably outraged at this apparent effort by a Democratic legislator to control their bodies, and many on the Left chortled at their failure to “get the joke.”

Except ‘wrongful conception’ is already a concept in American law, and with both houses of Congress under control of the Democrats who are – for the most part, at least – vehemently opposed to Texas’ abortion law, it’s entirely possible that Rabb could introduce his ‘parody’ bill and find it becomes the law of the land. Don’t expect Biden to be paying attention when it floats across his desk.

Rabb himself acknowledged his bill was inspired by Rep. Kelly Cassidy (D-Illinois), who introduced an amendment to an anti-abortion bill that would require men to watch “a graphic video on the side effects of Viagra” and undergo rectal and psychological exams before receiving a prescription. Rep. Rolanda Hollis (D-Alabama) introduced a bill in February 2020 demanding men receive a vasectomy following the birth of their third child, or within a month of turning 50. Several other politicians have countered what they view as unconscionable impingement on abortion rights with similarly outrageous legislation.

The idea, then, hardly sprang fully-fledged from Rabb’s forehead. However, the Texas abortion law that inspired it has triggered a massive backlash for a reason – just as Rabb’s bill depicts men as ‘inseminators’, a function of a single organ, the Texas law views women as walking wombs, with all other functions to be subordinate to nurturing an embryo whose implantation may or may not have initially been desired (unlike many state-level abortion restrictions, the law does not make exceptions for rape or incest).

Rabb admitted to the The Epoch Times on Monday that his proposal was a parody, introduced “to raise awareness about how government wrongfully infringes on the personal liberty of women and their bodily autonomy.” However, Rabb’s respect for women’s bodily autonomy seems curiously limited to their wombs – making his own view of women’s rights just as suspect as the state of Texas. It’s much more than the womb that’s under attack in 2021, after all.

US President Joe Biden last month announced a vaccination mandate requiring all employees of companies with more than 100 workers to force those workers to open their veins to a drug company that just 12 years ago was penalized with the largest fine in pharma fraud history and has repeatedly been caught breaking the law since then. Rabb hasn’t said a word against the administration’s vaccination mandates.

The congressman might well have proposed his bill as a parody, but the ruling class narrative managers can see how upping the ante on the already white-hot abortion debate will keep men and women – as well as Left and Right – at each others’ throats with enough ferocity that they won’t take a moment to stop and think about what the whole country stands to lose as their government takes away the right to control what goes into their bloodstreams. If the congressman truly believes in ‘my body, my choice’, he must recognize that a woman’s body doesn’t stop at her womb – any more than a man’s stops at his testicles.

The rest of the pro-choice movement should wake up to the same reality before it’s too late. Just a year ago many of them were shrieking at the thought of a Trump-developed vaccine grabbing them by the, uh, arm; now that that same vaccine, developed by the same Trump administration, is being administered by Creepy Uncle Joe with a wink and a sniff, perhaps it has become acceptable for some, but the whole point of ‘choice’ is the ability to say no. Then again, that’s a word Biden has never been very good at hearing.