Have occurred after the third crisis of hunger strike – lawyer 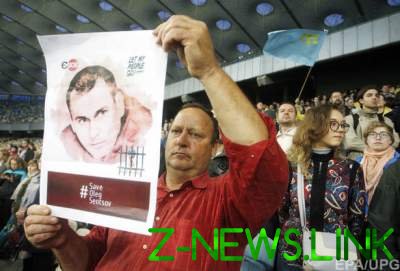 Data on the status of Oleg Sentsov contradictory.

Lawyer Dmitry Dinze said that the state wrongfully convicted in Russia Ukrainian Director Oleg Sentsov heavy, he suffered a third crisis of hunger strike. The Russian side claims that the Ukrainian all is well, his condition is stable.

“Talked to a lawyer Oleg Dmitry Dinze, who said that the situation is very bad. In his words, now third after a protracted crisis,” – said the Verkhovna Rada Commissioner on human rights Lyudmila Denisova.

According to the Ombudsman, Sentsov tried twice to be admitted to the hospital to get the medical equipment and start force-feeding.

See also:  The guards confirmed the prohibition of entry to Ukraine of Russian poet

“Oleg said that the hunger strike is going. He is drinking a minimal amount of medical formula and water, not to lose consciousness and control the actions that happen to him. His weight has dropped to 70 kg”, – she quoted further conversation with Dinze.

“Tatiana Moskalkova said that Oleg gave her consent on video. The Commissioner for human rights YANAO Anatoly Sak will be able to take a picture of Oleg and to take a video of your conversation with him. Representative of the Russian Federation promised to send me,” said Denisov.

See also:  Nutritionists told what foods are dangerous to eat after 50 years

The lawyer Dmitry Dinze after visiting the Director of the colony said that Sentsov decreased hemoglobin, anemia, a heart rate dropped to 40 beats per minute. According to the lawyer, Sentsov twice refused admission.

Oleg Sentsov may 14, 2018 on a hunger strike demanding the release of all detained Ukrainian political prisoners. Over the almost three months he has experienced several crises of hunger, however, stop the protest refuses.