Home / WORLD / ‘Havana syndrome’ strikes again? Two US officials to be evacuated from Vietnam over mystery symptoms amid trip by VP Harris

‘Havana syndrome’ strikes again? Two US officials to be evacuated from Vietnam over mystery symptoms amid trip by VP Harris 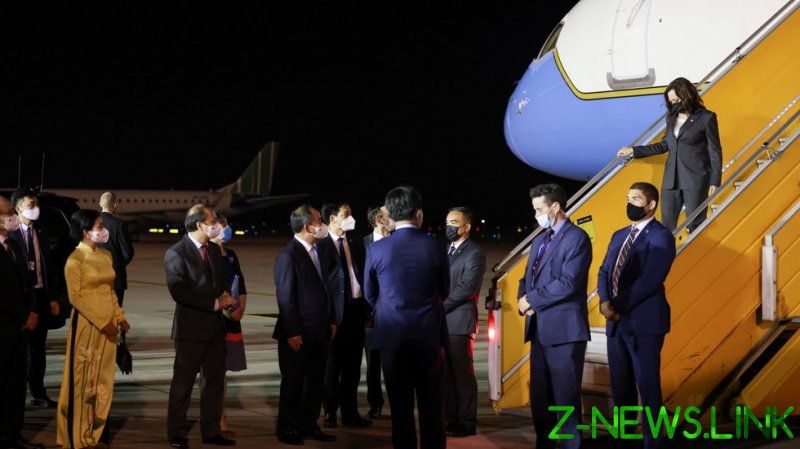 Harris’ departure from Singapore to Hanoi was delayed several hours after US officials on the ground reported two possible cases of the mystery Havana Syndrome – an unidentified illness that supposedly affects US officials in various parts of the world.

The US promptly launched an investigation into the two latest possible cases reported over the weekend, just days before the vice-president’s visit. Officials have not yet confirmed the cases were indeed linked to the baffling illness.

The disease was first reported in 2016 at the American embassy in the Cuban capital, hence the name. Sufferers apparently experience headaches, dizziness, tinnitus, hearing and vision impairment, vertigo and memory loss that apparently come as a result of some brain injuries of unknown origin.

According to media reports, there have been two separate incidents involving US staff members in Vietnam over the past week.

NBC journalist Josh Lederman said at least two US personnel in Hanoi would be “medically evacuated” from the country, adding that the recent incidents had involved “strange sounds.”

Washington takes “any reported incident of Havana syndrome seriously,” the White House Press Secretary Jen Psaki said at a press briefing on Tuesday. She also said that “there was an assessment done of the safety of the vice president, and there was a decision made that she could continue travel along with her staff.”

More than 130 instances of the mysterious set of symptoms have been recorded in US officials stationed overseas and stateside. The syndrome has also been reported in US diplomats in China and Austria – and some cases were even reported in Washington, DC, not far from the White House.

In mid-July, Austria revealed it was working with the US to investigate the ‘Havana syndrome’ cases among American diplomats in Vienna, who have been reporting strange incidents since early this year.

The cause of the mysterious malaise remains unknown. Various theories have been put forward to explain it, with some suggestions that it comes from ‘sonic’ or ‘microwave’ attacks.

However, one study by a Berkeley researcher concluded that the mystery sounds heard by diplomats were in fact from the echoing call of a species of cricket. Another study suggested the sounds were caused by exposure to fumigation pesticides.

US and other western media could not help blame it all on the traditional boogeyman – Russia. Some officials have suggested Russia was aiming “microwave-radiation devices” at US officials, though media reports admitted that there was no evidence to prove this theory.

The US National Academies of Sciences, Engineering, and Medicine (NASEM), however, concluded in December 2020 that “directed, pulsed radio frequency energy” was the “most plausible” explanation behind the onset of illness. The report commissioned by the State Department did not rule out other possibilities, though.