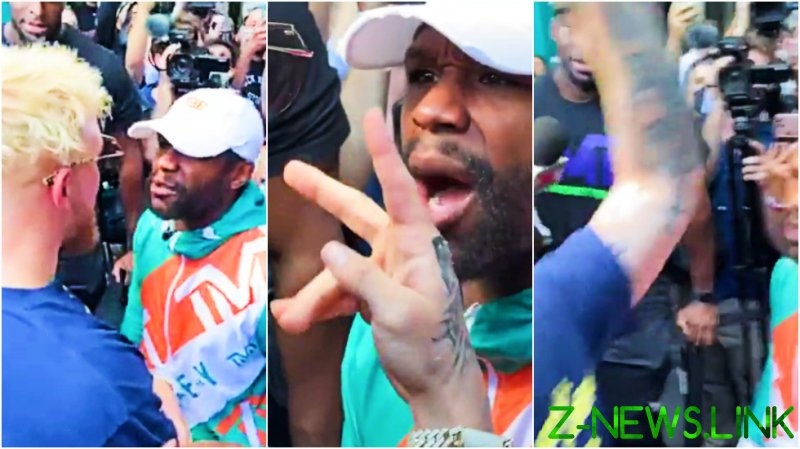 Even by the standards of master trash-talkers Mayweather and Paul, few would have expected the colossal scrap that ensued after the upstart pulled a stunt on the revered veteran as they exchanged barbs during the promotional event for the 44-year-old’s farcical fight on June 6 against Paul’s brother, Logan.

Approaching his sibling’s notoriously short-tempered rival at the vast Hard Rock Stadium in Miami, provocative Paul whispered to the camera that he was planning to pinch one of Mayweather’s famously expensive garments from the renowned fashion fanatic.

“I’m going to steal Floyd Mayweather’s hat,” confided Paul in a pledge that had all the hallmarks of a scripted stand-off more worthy of wrestling than boxing. “I’ll let you know how it goes.”

If the incendiary incident was planned, few could have predicted the immense scale of the skirmish that followed, with Mayweather barking at Paul while attempting to land blows on him in a confusing frenzy of attempted violence that carried on indoors and through at least one corridor in a blur of brawling.

A supremely proud man, Mayweather could be heard repeatedly accusing the 24-year-old of disrespect while threatening to “kill” the “motherf*cker”.

“Honestly – have had three easy fights as a pro so been itching for some real action,” Paul said on social media afterwards, referencing his victories over pitifully poor opponents in his boxing career so far, most recently trouncing ex-NBA star Nate Robinson and former UFC fighter Ben Askren in two novelty encounters.

“One of Floyd’s 30 bodyguards got a clean shot on me in the eye. Respect.”

Matters were less physical but arguably more poisonous inside the stadium, where Logan Paul brought his record of one fight, one defeat – against fellow YouTuber KSI – to the stage as he towered over the relatively diminutive Mayweather.

The unbeaten 50-fight fighter called Paul his “grandchild” and offered to fight both brothers on the same night, which he could likely do with confidence given the ease with which he has disposed of established fighters during his decorated career.

Evoking a shocking misjudgement by Paul when he filmed himself with friends telling jokes next to what appeared to be a dead body in a forest in Japan in 2017, Mayweather, who has a huge audience in Japan and held a lucrative fight there, told him: “I know what you did in Japan.”

In a tasteless response, Paul fired back by telling Mayweather that he knew “what you did to your wife” – a likely reference to Mayweather’s history of charges for domestic violence, which have included a brief jail sentence.

Jake Paul, meanwhile, portrayed himself with a torn shirt, looking into the camera to laugh “got your f*cking hat” before touting baseball caps that were already on sale online, branded with the words “gotcha hat”.

It came across as emblematic of the money-making mismatch that the main event will undoubtedly be, and a dispiriting validation of scenes that even a showboater of Mayweather’s standards should have had the sense to steer clear of.