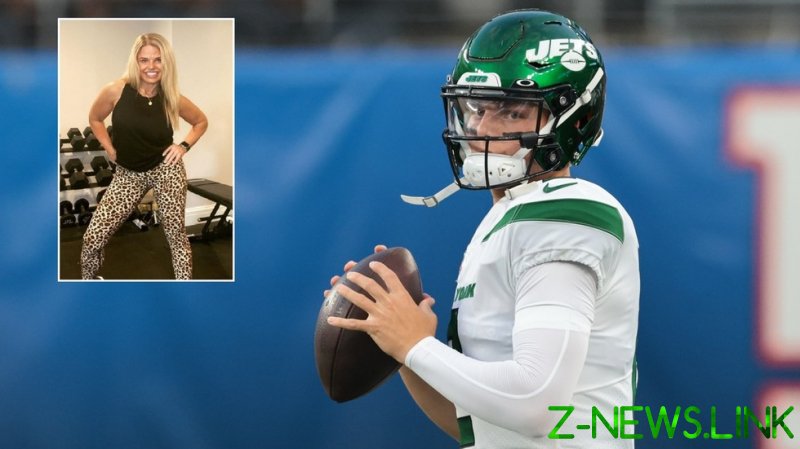 Lisa Wilson was once one of the darlings of the elite football championship and its fans after coming to prominence during the NFL draft in late April.

Dubbed the event’s “real MVP” and causing a Twitter frenzy by trending on the social network, the mother-of-six and self-described fitness fanatic was complimented on her “amazing looks”.

No doubt on Cloud Nine ever since her son was drafted to the big leagues and secured family wealth for generations to come, the Wilsons came crashing back down to Earth on Sunday when the enormity of the task the young quarterback has on his hands to reverse his team’s fortunes was made clear.

Losing 19-14 on the road at the Carolina Panthers despite dominating the second half, his New York Jets started where they left off in 2020 where a 0-9 record was amassed which eventually ended a miserable 2-14.

With 258 yards passing, two touchdowns and an interception, Wilson didn’t fare that badly as rookie debuts go, though he was sacked no fewer than six times.

Still not everyone saw it that way, and fired off on his mother by leaving a series of abusive messages she shared on her Instagram stories with her near 40,000 followers.

“Your son is a**,” wrote one, to which she replied: “Praying for your angry hateful heart!”

“Praying for your son to get better at f**king football!” came his response to that.

“Real talk though, why [is] your son so dog sh*t at football?,” asked another troll.

“I’m so sorry you’re so angry. I hope you can find happiness!” Lisa said, adding, “Hate is so toxic” as her caption to a screenshot of the exchange.

For these reasons, it is easy to see why Wilson wants her to delete her Instagram account after becoming fed up of the boo boys “treating my mom like crap!” and reportedly offered her money to do so.