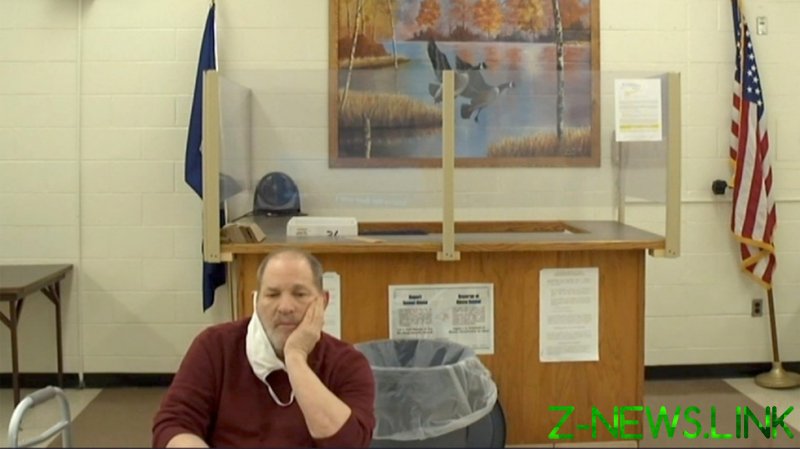 Defense lawyer Mark Werksman entered the plea on Weinstein’s behalf on Wednesday in Los Angeles County Superior Court. Weinstein, co-founder of the once-powerful studio Miramax, was shackled and brought into the courtroom by sheriff’s deputies in a wheelchair, wearing a brown jail jumpsuit and a Covid-19 mask pulled down under his nose.

The arraignment hearing came just one day after 69-year-old Weinstein arrived in California, ending his fight against being extradited to the state. He was sentenced to 23 years in a New York prison in March 2020, after being convicted in that state of raping one woman, an aspiring actress, and forcing a second, a production assistant, to perform oral sex.

In California, Weinstein is accused of sexual assaults on five unidentified actresses and models. The alleged incidents occurred from 2004 to 2013, mostly in Los Angeles and Beverly Hills hotel rooms. He faces charges of rape, forcible oral copulation, sexual battery by restraint, and sexual penetration by use of force.

“The big picture is that these allegations stem from many years ago, and that’s the problem the district attorney’s office is going to face,” Werksman said. “And that’s the problem all of these accusers face, in that they brought allegations that can’t be substantiated or corroborated by any forensic evidence, any contemporaneous reporting, any credible witnesses.”

Werksman told Judge Sergio Tapia that he will file a motion to dismiss three of the charges, saying they were beyond the statute of limitations. He called those charges “baseless” and “from long, long ago.” He added that he’s confident Weinstein will be acquitted if given a fair trial.

Los Angeles prosecutors obtained a grand jury indictment against Weinstein in March, so they won’t need a preliminary hearing to show probable cause that the allegations are true. That means the case will be able to advance to trial relatively quickly. Weinstein’s extradition agreement reportedly includes a provision that the trial begin by November, unless the defendant waives that right.

Extradition proceedings were halted last year because of the Covid-19 pandemic, and Weinstein’s lawyers had argued unsuccessfully for his transfer to California to be delayed further on “humanitarian” grounds, given his medical ailments. Werksman asked on Wednesday for a health examination of Weinstein, citing such concerns as his client’s vision. “He’s going blind in one eye,” the lawyer said.

Starting in 2017, Weinstein was accused of sexually assaulting dozens of actresses and other young women, and of using pressure tactics to silence his victims. Some of his accusers, such as actresses Rosanna Arquette and Heather Graham, said Weinstein threatened to block them from getting film roles if they didn’t do what he wanted.

“Anyone who abuses their power and influence to prey upon others will be brought to justice,” Los Angeles County District Attorney George Gascon said in a statement on Wednesday.