Home / WORLD / Hartlepool are ‘explaining’ a monkey statue in case anyone gets offended – no one has been yet, but you can’t be too careful, eh?

Hartlepool are ‘explaining’ a monkey statue in case anyone gets offended – no one has been yet, but you can’t be too careful, eh? 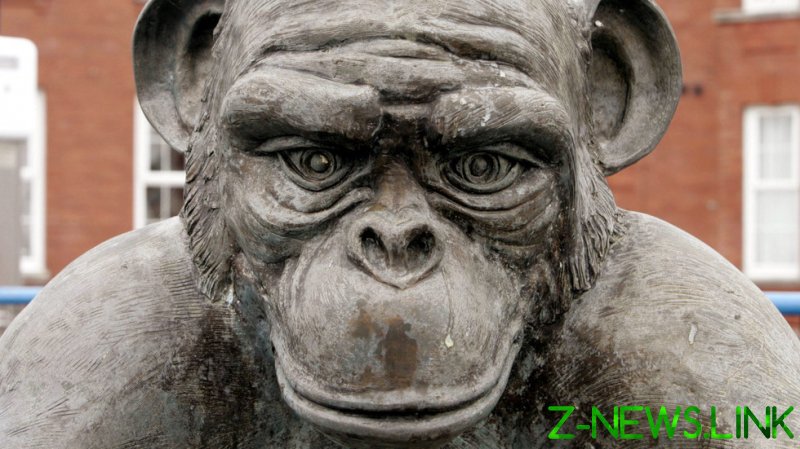 Because it certainly isn’t offensive to the people of Hartlepool who, legend has it, actually strung that primate up. Surely they’re the folk most likely to take offence on account of it, well, making them look like morons.

The legend of the monkey hanging is known to everyone in the northeast of England, it’s part of our culture. Our very DNA.

Let me fill you in. During the Napoleonic Wars, a ship was wrecked off the coast of Hartlepool and a monkey was washed ashore – very much alive and well. Clinging to a barrel or whatever. And, allegedly, dressed in a uniform. The reason for a ship having a monkey dressed as a French officer has never been adequately explained, a minor detail. Never mind that, who cares anyway.

Now the good people of Hartlepool, they had never seen a monkey but they hadn’t seen an actual Frenchman either. But they had heard of a short-arsed French megalomaniac called Napoleon Bonaparte and his lust for power. They knew there was a war on. They knew the French spoke an alien language and planned an invasion.

The monkey was a French spy! It must be, come on, what the hell else could it be? Err, not a very clever French spy though, seeing as he was dressed in a French sailor’s outfit. But never mind – let’s get him!

There was actually a show trial but the monkey did not offer much of a defence, “Oooh, oooh. Eeeee eeee. Ooo ooo ooo.” (Translation: “I’m not French, you morons, I’m a monkey. Give me a quick sniff. I don’t smell of garlic!”)

Sounds a bit French, no? And no Hartlepudlian spoke French. Nobody spoke monkey either, unfortunately for the monkey. Oh dear. They dragged that chimp – presumably it was a chimpanzee, it’s somehow a much better story if it was – and strung the poor thing up in the town square.

This legend might even be true. I certainly hope so. And I have lots of friends from Hartlepool and they most certainly hope it’s true too. It’s part of their sense of identity and, I dare say, their collective and self-effacing sense of humour.

And this bit is definitely true because I saw it on the telly: Hartlepool actually DID elect a monkey to be Mayor. You know the mascots that prance around the pitch at the start of a football match and at half time and all that? Low-flying Hartlepool United had one of those dressed, of course, as a monkey.

H’angus the Monkey was his name. Angus plus hang – get it? These fine folk thought a man in a monkey suit was an infinitely better choice than some dodgy Tory or Labour Party politician. H’Angus also promised free bananas for all school children. Always a winning policy.

And, anyway, H’Angus was hilarious. He would often lead the fans in song and was occasionally escorted from away team’s grounds by the police – for simulating sex with a female steward, and such like. Classic monkey, and Frenchman, behaviour – I would suggest.

This local bloke, Stuart Drummond, then actually jumped into a real suit and took the job seriously, to the disappointment of many of my mates in Hartlepool. They didn’t want the organ grinder, they voted for the effing monkey! Still though, he was reelected – better him than some actual politician, they’re the real primates.

Hartlepool also has a statue of this poor dead monkey, and has had it on the quayside for ages. Now, as I said, pretty much everyone in the northeast of England knows all this anyway. The same as everyone knows that someone from Middlesbrough is a ‘Smogmonster’ (or ‘Smoggy’ for short) – on account of the massive ICI chemical plant’s chimneys that dominated that nearby city.

Yet statues have become political in the wake of the Black Lives Matter protests, being toppled in the river and defaced and all sorts of fun statements made by a marauding mob.

So now the Hartlepool local council want to polish their woke credentials, like so many mediocre bureaucrats these days, and are planning to attach an explanatory plaque to this statue, because it could be “misused by those with differing agendas to portray Hartlepool as unfriendly towards foreigners”.

Oh God. Now, come on (or ha’way as we’re likely to say up that way). Really? Isn’t it more unfriendly to monkeys? The French hate us anyway.

The local bureaucrats admit, though, that they have received a tidal wave of precisely NO complaints. Zero.

“We have not received any complaints about the statue, and in fact it helps raise around £2,000 a year for charity thanks to the coins deposited within it by visitors,” a Hartlepool Borough Council spokesman told Sky News.

Bring back H’Angus, I say, they abolished the mayoral post a decade or so ago. But, Stuart, mate – stay in the monkey suit: you’d make far more sense than the dumb arse real politicians.