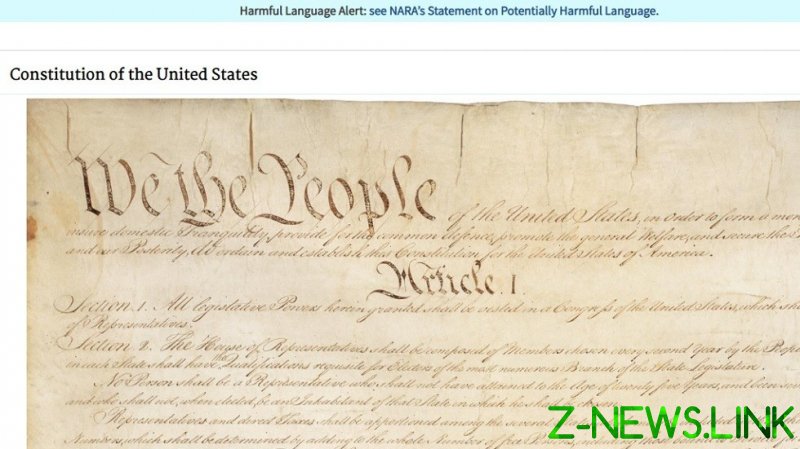 “Harmful Language Alert” labels can be found on pages displaying the scanned versions of the Declaration of Independence and the Constitution, as well as the first ten amendments, known as the Bill of Rights.

The addition has caught the eye of Congresswoman Lauren Boebert (R-Colorado), who pointed it out on Tuesday.

She wasn’t the only one. Ken Cuccinelli, former deputy Homeland Security secretary in the Trump administration, caught the labeling of the Constitution on Monday – a public holiday in the US.

“What are we becoming?” Cuccinelli asked in a tweet. “Are you kidding me?”

It was no joke, however. The link on the label leads to the National Archives and Records Administration (NARA) statement on “potentially harmful content,” defined as reflecting “racist, sexist, ableist, misogynistic/misogynoir, and xenophobic opinions and attitudes” or being “discriminatory towards or exclude diverse views on sexuality, gender, religion, and more,” among other criteria.

The archivists are told to inform the users about the presence and origin of such “harmful content,” update descriptions with “more respectful terms” and make “an institutional commitment to diversity, equity, inclusion, and accessibility.”

It was unclear when the Constitution, the Declaration of Independence and the Bill of Rights were labeled as potentially harmful. Back in July, during its traditional reading of the Declaration on the anniversary of its adoption – July 4, 1776 – the National Public Radio added a disclaimer for the very first time, saying that “the words in the document land differently” after “last summer’s protests and our national reckoning on race.”

This was a reference to Black Lives Matter protests that began in May 2020, after the death of George Floyd in Minnesota, quickly attributed by activist groups to institutional racism in policing and the entire US social and political system. Democrats Joe Biden and Kamala Harris backed the protesters; in April, after a Minneapolis police officer was convicted of murdering Floyd, now President Biden and Vice President Harris hailed the verdict and demanded reforms in the name of racial justice.

In a series of tweets in July, NPR said the Declaration of Independence contained “flaws and deeply ingrained hypocrisies,” pointing in particular to “a racist slur against Indigenous Americans” – presumably referring to the line about “merciless Indian savages” the colonists complained about to the British crown.

The first outlet to call attention to the National Archive labels appears to be the National Pulse. In an article on Monday, the outlet pointed out that the tags were not included on items that contained outright racist insults aimed at African-Americans and Jews – such as a 2008 article from the Archives magazine Prologue, dealing with Jim Crow laws, or Appendix 16 of the 1964 Warren Commission Report on the assassination of President Kennedy.