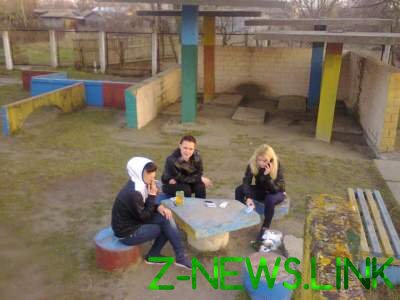 This is not the first incident with participation of the attackers.

In court today Raspberry Zhytomyr region will elect a measure of restraint the company of fiends who were trying for 500 hryvnia to kill 17-year-old girl.

The story shocked the world with its cruelty – the company of three girls and two guys later in the evening took from home a 17-year-old Elena Zhurahovsky, and then brutally beaten. And the finished bricks to the head, and then left to die.

Reporters learned that her condition remains very serious. And two of her amidzic themselves raising small children. Officially, the suspects never work. And despite the fact that all the identities were established, they were not arrested.

“Criminal proceedings opened under article “deliberate heavy injury”. The reasons for the incident are being investigated. Because of the occasion we know from the words of suspects, and the victim has not recovered. Also, check the information about the parents of minors. Perhaps they also attract for the improper performance of parental duties”, – said the press service of the police in Zhytomyr region.

Residents of the town say that secindary known enough in the city personality. And the reason to investigate the relationships found repeatedly. As evidence shows, photo figurants who “speak for themselves”.

Also, much discussion of the girl’s parents. “In front of them took away the child. After that, she didn’t come home. The parents explained, they say, were afraid. But in fact they do not care about the child. Even now they are not in the hospital with her. And at home. This family is such that for 200 UAH. withdraw the statement. They only want to drink. Very sorry for the girl”, – told the “news” local resident Sergei.