Home / WORLD / Half of Republicans believe Capitol riot was ‘mostly peaceful’, while 60% want Trump to run in 2024 – poll

Half of Republicans believe Capitol riot was ‘mostly peaceful’, while 60% want Trump to run in 2024 – poll 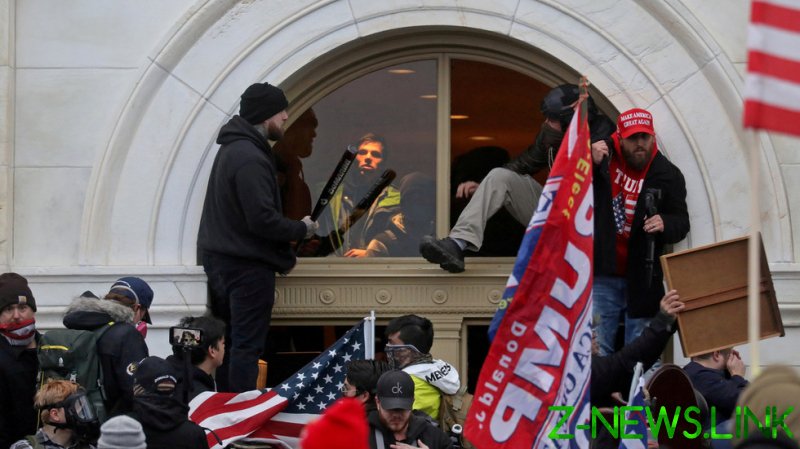 While the US Capitol riot left five dead, including one officer, and numerous others injured, around half of Republicans believe it was a mostly peaceful protest, and partly the fault of left-wing activists who got involved to “make Trump look bad,” according to a new Reuters/Ipsos poll.

In the wake of the riot, authorities have arrested numerous participants, the House of Representatives voted to impeach Trump for “inciting an insurrection” (an effort that failed in the Senate), and the former president was booted from major social media platforms for spreading allegations about the presidential election being rigged in Joe Biden’s favor.

Trump’s own role and responsibility in the day’s proceedings (he spoke to a crowd of supporters in DC hours before the riot and said they must “fight like hell”) has also split Americans based on their political affiliations, according to the poll.

While 59% of Americans overall see the former president as “bearing some responsibility,” only three in 10 Republicans believe this to be true. Among Democrats, eight in 10 see him as partly responsible, while six out of 10 Independents believe the same.

Some Republican lawmakers, like Sen. Ron Johnson (R-Wisconsin), have floated the theory that left-wing protesters were involved in the riot, while Trump has blasted federal authorities for “persecuting” many protesters who posed “zero threat.”

“Some of them went in and they’re, they’re hugging and kissing the police and the guards. You know, they had great relationships. A lot of the people were waved in and then they walked in and they walked out,” he recently told Fox News’ Laura Ingraham. He did acknowledge, however, that they “shouldn’t have” entered the Capitol as lawmakers were working to certify election results disputed by him.

Hundreds have since been identified and arrested for their participation in the events of January 6.
While 60% of Republicans see the election as being “stolen” from Trump, 60% of Americans overall believe Biden was the legitimate winner, according to the poll. Trump remains a popular figure among his base (he scored the most votes of any incumbent president in the last election), as eight out of 10 still hold a favorable view of him, and over half want to see him run for president again in 2024.

The Reuters/Ipsos poll was conducted among 1,005 adults between March 30 and 31.

Liberals took to social media to argue that the poll was confirmation that conservatives had fallen for “propaganda,” and that “disinformation” was fueling the party once led by Trump.

More conservative Twitter users, however, questioned the accuracy of the poll and wording of the questions (as one can believe that the riot turned violent but was also mostly peaceful), and blasted the media for previously making other more left-wing protests appear non-violent when they had turned to rioting and looting.

“I wish this piece linked to the actual poll, because the way the question appears to be framed is very odd. What happened on January 6 WAS ‘largely a non-violent protest’– the Capitol stormers were only a fraction of the crowd. What’s that doing lumped in with the false flag lie?” the Dispatch’s Andrew Egger tweeted.