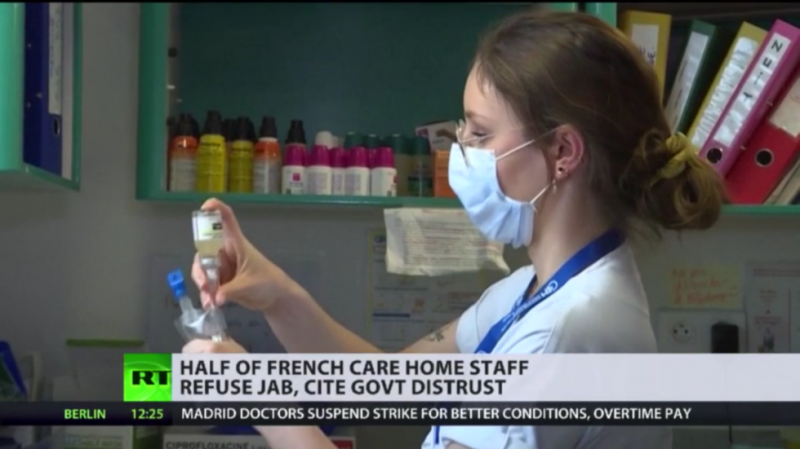 France has one of the highest vaccine skepticism rates in the world, the country’s media reported earlier this month. Four in ten people there say they are unlikely to get vaccinated against the novel coronavirus anytime soon.

The sentiment seems to be even more widespread among the French medical caregivers since around half of them are in no rush to take the jab even if they have an opportunity to do so, the media report, citing data provided by the officials and experts overseeing the national vaccine rollout.

The situation appears to be particularly odd due to the fact that elderly people in care homes are at higher risk of contracting the disease and suffering the severe consequences of infection.

According to government statistics, 25,000 people died from Covid-19 in French nursing homes. That is more than a quarter of the total national death toll linked to Covid-19, which amounts to over 87,000.

Still, many health workers are simply afraid to be vaccinated, as a care home worker and a trade union official with the French General Confederation of Labor Malika Belarbi told RT, adding that the lack of proper communication between the government and the medical workers is at fault here.

We have lost confidence in the government over the vaccine process. People are concerned about side effects. Some want to wait and get more information.

“It is understandable that medics and the rest of the population want the most effective option,” Belarbi says. The government also appears to sometimes only strengthen such convictions. In late January, French President Emmanuel Macron admitted that the AstraZeneca jab appeared to be only “quasi-effective” for people over 65 years of age.

The French media reports can sometimes be not particularly reassuring either. In February, Le Monde said that caregivers reported “strong side effects, such as fever and fatigue” after getting an AstraZeneca injection, with “influenza-like illnesses, which are often very intense” being recorded in people aged just over 34.

“There has been so much conflicting information about the vaccines, so we are very much confused,” Belarbi says, adding that there are concerns about the side effects of the AstraZeneca jab in particular.

The vaccine skepticism among medical workers has apparently become so widespread that it prompted top French officials to intervene.

Last week, French Health Minister Olivier Veran called on all health workers to vaccinate “rapidly”, saying that it is a matter of “our collective security” and the capacity of the French health system to function.

France’s National Academy of Medicine took a step further and suggested making vaccination compulsory for medical workers in one of its recent tweets.

Belarbi maintains that caregivers want to protect themselves, their loved ones and people in their care. What they need, she said, is open communication with the authorities and up-to-date information on vaccines.