Half of Canadians say Trudeau ‘not up to the job’ – poll 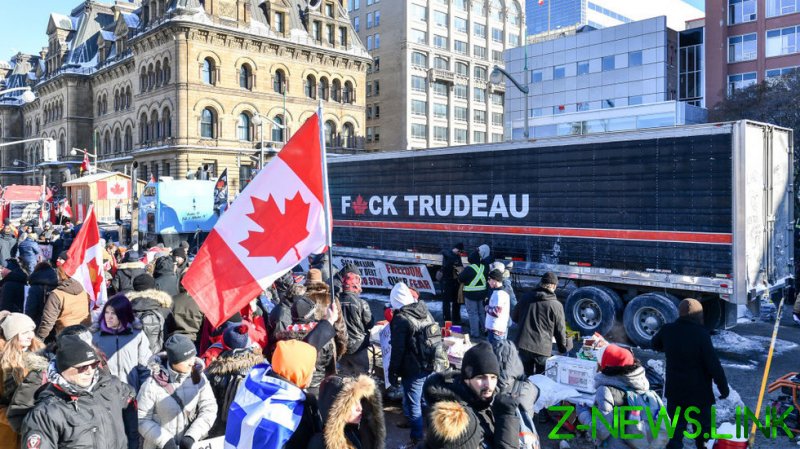 Canadian Prime Minister Justin Trudeau has alienated voters with his handling of the Freedom Convoy protests, a new poll shows.

Only 16% of respondents to the Maru Public Opinion poll said they would vote for Trudeau based on his actions over the past two weeks, when a protest by truck drivers against a Covid-19 vaccine mandate bubbled up into massive blockades, inspiring similar movements in several other countries. Just 29% said Trudeau had acted “like a prime minister should,” and 48% concluded that he was “not up to the job of being prime minister.”

“The last time I’ve seen numbers even close to this were in the final days of Brian Mulroney,” Maru executive vice president John Wright told the National Post newspaper. “I think this could cost him his job.”

Mulroney, who was Canada’s prime minister from 1984 to 1993, set record lows with approval ratings around 12% in late 1992. Trudeau, who was re-elected in a snap election last September, had a 42% approval rating as recently as last month in polling by the Angus Reid Institute.

According to the latest poll, Canadians equally blame Trudeau and the truckers for the situation reaching a boiling point. The Maru poll found that 44% of Canadians believe the Canadian leader “inflamed” the crisis, while 46% deem the truckers themselves guilty of “the incitement and escalation.” Some 53% of respondents said that the PM “looked weak in the face of threats to the country.”

And while 56% of Canadians polled showed no sympathy for the Freedom Convoy, public opinion has shifted against Trudeau’s harsh Covid-19 rules. A new Angus Reid poll showed that 54% of Canadians support an immediate halt to all pandemic restrictions, a stark contrast to the 56% who said as recently as in December they would have supported another round of lockdowns over omicron.

Trudeau has courted criticism for effectively going into hiding as the protesters were still on the approaches to the capital, Ottawa. The Prime Minister was moved to an “undisclosed” location, ostensibly, due to the security concerns, and dismissed the overwhelmingly peaceful protesters as having “unacceptable” views. Trudeau has repeatedly argued that the the truckers and their supporters hold extremist views, effectively comparing them to Nazis.

“People of Ottawa don’t deserve to be harassed in their own neighbourhoods, don’t deserve to be confronted with the inherent violence of a swastika flying on a street corner, or a Confederate flag, or the insults and jeers just because they’re wearing a mask,” he said on Monday.

Police on Saturday began trying to end a Freedom Convoy blockade of Canada’s busiest border crossing to the US, the Ambassador Bridge from Windsor, Ontario, to Detroit. A court ruled the blockade illegal, giving protesters until Saturday evening to disperse on their own or risk being arrested and having their vehicles seized.

The move followed an emergency declaration by Ontario Premier Doug Ford. The bridge carries about 25% of trade between the US and Canada.