Home / WORLD / Half of Americans & one THIRD OF DEMS think Biden should resign over Afghanistan exit, but many worry VP Harris is no better

Half of Americans & one THIRD OF DEMS think Biden should resign over Afghanistan exit, but many worry VP Harris is no better 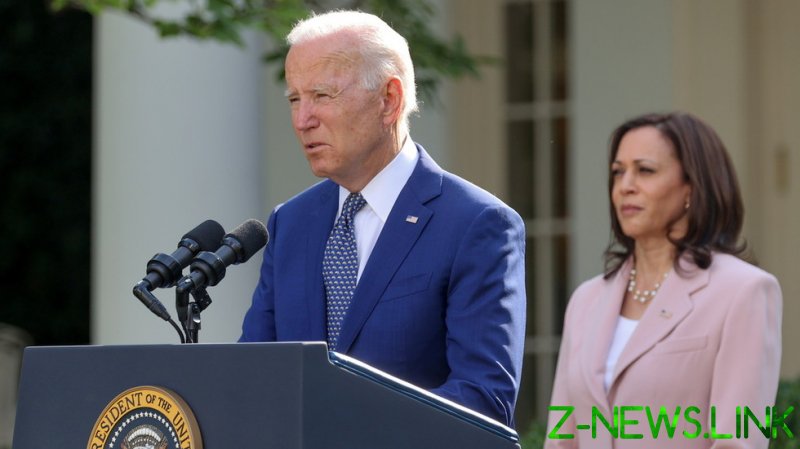 While the majority seem to want Biden to pay for his failures in Afghanistan, 39% of Rasmussen’s poll respondents think he deserves another chance – or at least don’t want him disposed-of just yet.

Perhaps most surprisingly, however, almost a third (32%) of Democrats agreed that Biden should resign over the debacle, according to the poll results, released Wednesday. Less surprising, 75% of Republicans felt the same.

Meanwhile, 60% of voters agreed with the statement by South Carolina Republican Sen. Lindsey Graham that Biden’s decision to “abandon thousands of Afghans who fought with us” as well as “some American citizens” was an impeachable offense.

Biden was accused of making a mess of troop withdrawal, especially after 13 service members died in a suicide bombing at Kabul airport as the operation entered its final days. At least one member of the military has vocally and controversially declared he has lost his trust in the commander-in-chief, demanding “accountability” and “leadership” from a government that, he believes, has shown neither.

Despite the criticism of Biden, many were not enthused about the prospect of Vice President Kamala Harris taking over the presidency.

The majority agreed on Wednesday that she wasn’t suited to the Oval Office, with 47% overall saying she is “not at all qualified” – an opinion which one third of Democrats agreed with. The figures continue a trend that has persisted over Biden’s presidency so far, with one poll last month finding that more than a half of Americans thought she was doing a “bad job.”

Last month, another Rasmussen poll found some 55% of voters said Harris was unqualified to become president, and this number has risen over the last few months. In April, just 49% thought the former California attorney general was fit for the presidency.

All this is despite the Biden administration’s conscious efforts to put Harris front and center in public events and to have her take phone calls from foreign leaders, while the White House refers to itself as the “Biden-Harris Administration” in a break from tradition.

Already in March, 47% of Americans believed someone other than Biden was making the high-level decisions in the White House – though that poll didn’t specify whether they believed it was Harris.

Polling data for the most recent Rasmussen survey was collected online and via telephone from August 30-31.

Disgust over Biden’s Afghanistan pullout has been bipartisan, with 74% of respondents to a CBS News survey on Tuesday declaring the withdrawal process had gone very or somewhat badly. Others described Biden’s strategy as ineffective, incompetent, and ungrateful to those Afghans who helped American forces during the war.