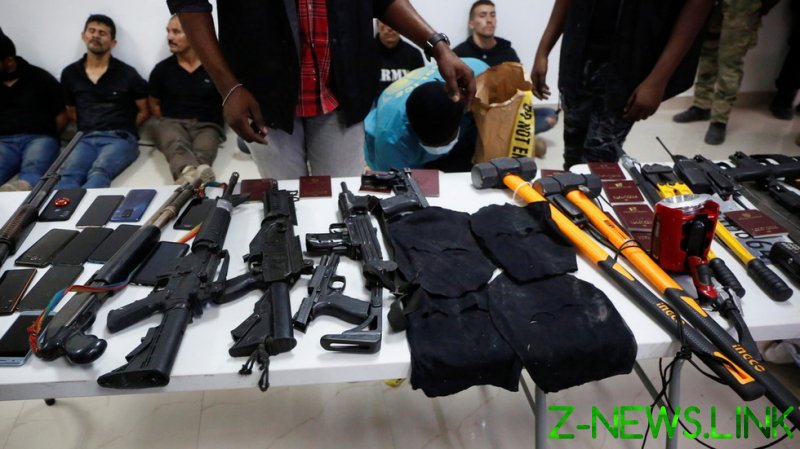 At least 28 people carried out the the murder plot earlier this week, police chief Leon Charles told reporters on Thursday, noting that several suspects were brought into custody, while others were killed in firefights with authorities.

“We have arrested 15 Colombians and the two Americans of Haitian origin. Three Colombians have been killed while eight others are on the loose,” Charles said, adding that police had recovered “weapons and materials used by the assailants” while showing off rifles, machetes and other tools seized.

We will strengthen our investigation and search techniques to intercept the other eight mercenaries.

Later in the evening, Taiwan’s diplomatic compound in Haiti said that 11 “mercenaries” had been arrested on the facility’s grounds, but did not elaborate beyond stating that the police operation “went smoothly.” The nationalities of those suspects remain unclear.

Haiti is among a small handful of nations to recognize and keep formal diplomatic ties with Taiwan, which Beijing considers to be a province of China proper.

The US State Department told Reuters it could not confirm whether American citizens had been arrested, but said it is in contact with Haitian officials to determine next steps. The island’s elections minister Mathias Pierre identified the two Haitian-Americans as James Solages, 35, and Joseph Vincent, 55.

Moise was fatally shot by a group of gunmen at his home near the capital of Port-au-Prince early on Wednesday morning, with his wife also seriously wounded and airlifted to Miami, Florida for treatment. Few details about the attackers have emerged, though interim Prime Minister and acting President Claude Joseph previously claimed that they spoke both Spanish and English and may have posed as American DEA agents.