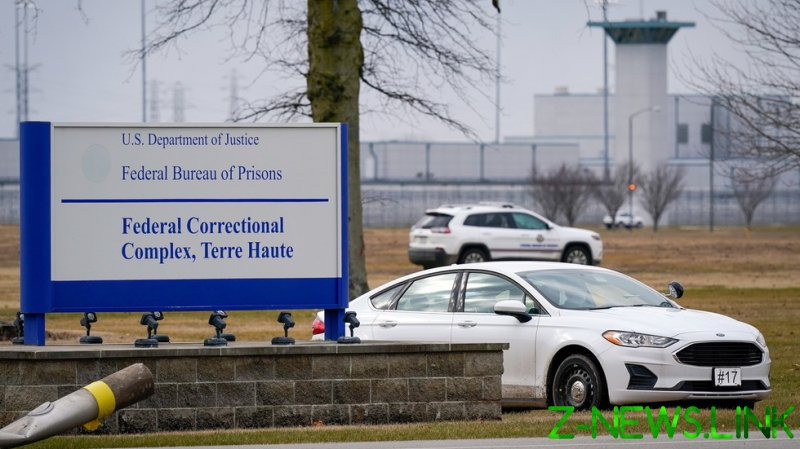 Incarceration can be tough on a prisoner’s family, as it is for the individual kept under lock and key. It’s the not knowing, and the inability to understand what their loved one’s days entail.

For Dana Gottesfeld, however, the situation is far more extreme.

Her husband, Marty, was handed a 10-year sentence for launching a cyberattack on Boston Children’s Hospital to protest against the treatment of a vulnerable, learning-disabled 15-year-old girl, Justina Pelletier.

That seemingly harsh sentence was compounded when Marty was banged up in the Communications Management Unit (CMU) of the high-security United States federal prison Terra Haute, in Indiana. As the name suggests, it is designed to isolate inmates from the world.

CMUs were created under George W. Bush when Osama bin Laden was the world’s most wanted man, the thinking being that anyone who was captured would be unable to communicate with terror cells on the outside, thereby stopping attacks.

No personal contact is allowed, and any visitors (including children) are ‘met’ in separate rooms, over a telephone and through a glass partition. All American prisons check mail for contraband, but in the CMU, mail is opened, read, copied, and evaluated before being sent in or out. Inmates in regular prisons get 300 minutes of phone time per month, but in the CMU it’s 15 minutes, twice a week, with someone listening in to both sides of the conversation.

RT.com has spoken to several people with knowledge of the CMU, and they attest to letters or emails arriving with parts missing.

The CMU structure creates a ‘black site’ so the prisoner has no uncensored contact with the outside world.

Legal expert Walt Pavlo said: “What the hell is Marty doing in there? He is a guy who messed about with someone’s internet server, it’s crazy to have him in there.”

Dana describes Marty as a “laid back, nice guy,” and his criminal record doesn’t do much to dispel that notion. His crime was non-violent and born out of a deep moral concern for a girl he felt was being mistreated.

This is in stark contrast to others who’ve been interred in CMUs, such as the Holy Land Five, all convicted of financing terrorism; Ahmed Mohammad Ajaj, convicted of participating in the 1993 World Trade Center bombing; and Madhatta Asagal Haipe, found guilty of hostage-taking and a founding member of the Abu Sayyaf Group. These examples all skew one way: they are Islamic terrorists.

A source told RT.com that Gottesfeld is what is known colloquially as a ‘balancer’. The theory is that the American authorities are wary of creating an on-shore Guantanamo Bay, so they allegedly place particular felons in CMUs to make them more ‘diverse’.

Being used as a political pawn is bad enough, but what goes on inside the CMU is incredibly opaque, according to what sources have told RT.

These ‘balancers’ are frequently not violent, but they are surrounded by people capable of extreme violence. Two sources claimed that a horrific beheading occurred in the Terra Haute CMU. They only spoke on condition of anonymity, due to still being part of the penal system, but it allegedly occurred in 2018. The alleged victim’s name was Robert David Neal, serving time for non-violent charges of financial fraud.

This is backed up by a written account co-authored by Gottesfeld, explaining how Neal was bound and executed by another of the prisoners, yet reports of this are virtually non-existent in the mainstream media.

The same source also claims the so-called ‘trick bag’ is a common activity, too. This practice allegedly sees one inmate selected and a bag placed over their head as other prisoners attack them, with guards allowing it to occur. Finding concrete confirmation of these claims is impossible because of the structure of the CMU, but many such allegations abound.

However, there is record of the complaints of Gottesfeld, who sends emails detailing his experiences – of course, these are checked before being sent. One disturbing allegation centres on staff member Todd Royer. Gottesfeld claims…”The BOP’s (Federal Bureau of Prisons) correctional programs division (CBP) seems totally unaware of the multiple allegations that Mr. Royer practices voyeurism, nosing into cells to watch prisoners defecate.” He further claimed that, “Mr. Royer was recently video-recorded leaving the frame and entering the unit’s off-camera shower area, where a prisoner reported Mr. Royer for reaching his hand into the shower that the prisoner was using”.

The situation has been made worse by Gottesfeld voicing concerns that due process has not been followed and his complaints were never forwarded to the relevant departments. He claims…”As I’ve previously written, BOP staffers here at Warden Brian Lammer’s Federal Correctional Institution (FCI) Terre Haute took none—not one—of the required post-report steps, e.g., they never separated Mr. Royer from his victims (plural), they never told his victims the status of any investigation (in reality there was none), they never followed-up to protect against retaliation (instead they retaliated viciously).”

It is impossible to confirm these allegations categorically, but it is disturbing to hear an inmate voice them, particularly along with the litany of other issues that were raised by sources for this article.

Gottesfeld also alleges poor hygiene…“Cockroaches, spiders, and rodents are everywhere. The BOP provides roach traps, but they are literally too small for the local specimens.”

On top of that, he’s branded the prison a “shithole” due to leaking roofs, and walls and floors covered in condensation.

RT has formally applied to speak to Gottesfeld to seek confirmation and proof of his claims, but the suggestion of an interview was blocked due to Covid-19 restrictions. However after some pushback, RT.com was allowed to apply – but in doing so, had to supply the interviewer’s full details including address, date/place of birth, eye colour, height, weight and passport number. Whether an interview will be granted is unclear at the time of writing.

One of Gottesfeld’s legal team, Aaron Williamson, did confirm that complaints were voiced. “Marty has made several complaints about the conditions of his confinement. He has also made complaints about sexual harassment.”

Interaction with lawyers has also been an issue, with the DOP restricting contact, citing Covid-19 restrictions. This is also confirmed by his legal representatives.

The BOP’s argument is that they only have the resources to deal with imminent cases, which they define as “typically identified as a deadline which is within two weeks or less from the request of the call; however, staff have the discretion to make other accommodations if staffing and resources permit.”

The shutdown in communication is also affecting another CMU inmate, Donald Ray Reynolds. He is serving life plus 75 years for drug dealing, gun charges, and money laundering – another arguably harsh sentence for someone with no prior criminal record. Further doubt has been cast on the case by search warrants being obtained for his parent’s home via information from confidential informants. One informant didn’t appear at the trial, and the other denied ever saying Reynolds was involved in drugs, while his guns were allegedly bought legally thanks to his Tennessee open-carry permit. Reynolds has never pleaded guilty.

His parents spoke to RT.com and reiterated their son’s innocence. Rubbing salt into the wounds, they haven’t had any communication with him for months and have no idea about his welfare.

Mother Janice said: “He was a great student, he never missed a day of school. He took care of his family. They are torturing him to make him admit something he didn’t do. When you talk to the judges and the government, they refuse to listen to you.”

His father, Donald Sr., was part of the US military and that makes the pain even greater, Janice added: “I feel ashamed of our country, to be treated like a terrorist and when you fight against that, it makes me angry every night to know that my kid is somewhere that I’ll never know, they took him away from us and I can’t watch him grow up. It makes me so angry our government can do that and nobody says nothing.”

There are other allegations and claims of misconduct inside the CMU which have been reported to RT, suggesting they are part of a recurring pattern, rather than one-off incidents. Some believe that felons who have committed nonviolent acts or do not accept guilt are placed alongside the violent terrorists as a form of additional punishment. Once in there, what happens is open for debate, as all communication is under the strict control of the authorities.

Gottesfeld is the lightning rod and has attracted a degree of media attention, but there are many men under the same conditions who we will likely never hear about. Unrelated sources all echo one another, strongly suggesting the CMU is an abuse of power and the opposite of what America’s justice system should stand for.

It’s time to free Gottesfeld from his chamber of darkness, and all the other individuals in there. No one deserves what is being done to them.

RT has contacted the United States Prison, Terre Haute for comment regarding these allegations.