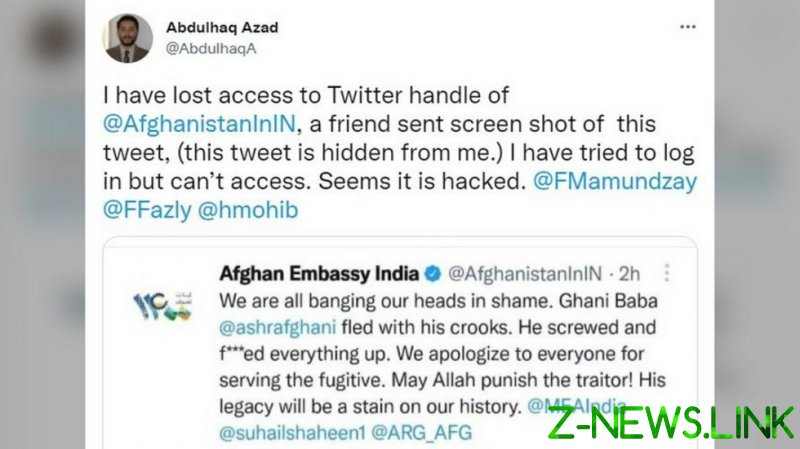 Ghani departed Afghanistan on Sunday amid the Taliban’s capture of the capital Kabul, and later stated that he had resigned his office to prevent bloodshed during the transition of power. A tweet posted by the official account of the Afghan embassy in New Delhi blasted the ex-leader, saying Ghani “screwed and f**ked everything up” and “fled with his crooks.”

“We apologize to everyone for serving this fugitive. May Allah punish the traitor,” the message said.

The sexually loaded expletives were apparently chosen deliberately, since subsequent tweets brought up the 2019 scandal, when Ghani’s presidential palace was accused by his former advisor of extracting sexual favors from women in exchange for career opportunities.

The implication that the denunciation was posted by embassy staff was disputed by its Press Secretary Abdulhaq Azad. He retweeted a screenshot of the initial post, saying he had lost access to the Twitter handle and that the account had been apparently hacked. The offensive tweets were later deleted.

The Taliban has taken almost full control of Afghanistan and is reportedly planning to announce reestablishment of the Islamic Emirate of Afghanistan, returning to the name that the country had during the 1990s rule of the militant Islamist movement.

It pledged to observe human rights and called on the Afghan people to remain calm during the transition period. The advancement of Taliban fighters caused a mass exodus of people afraid for their safety.