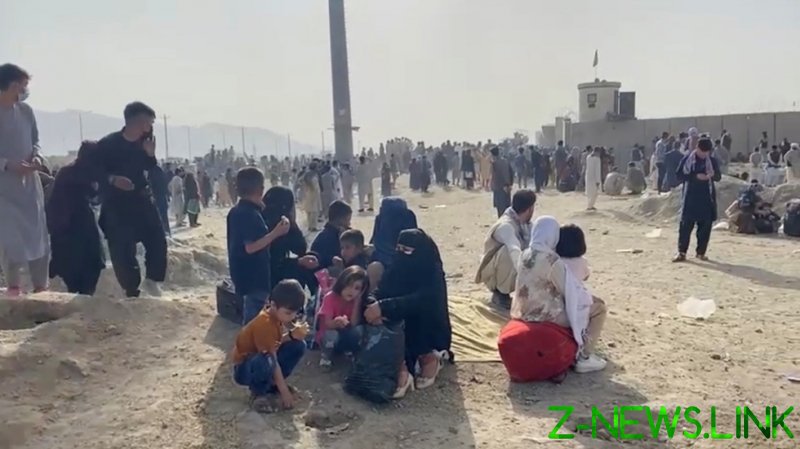 With thousands of Afghans still camped around the airfield hoping to catch a flight out of the city, chaotic scenes were captured in videos circulating online early Thursday morning local time, some purporting to show Taliban fighters firing smoke and stun grenades to disperse crowds gathered a short distance outside the airport.

While NBC’s Richard Engel, who is reporting from Kabul, earlier said that the US-secured “military side” of the airport had become more orderly and that evacuation flights were “picking up,” ABC journalist Ian Pannell noted that the situation was much different on the “civilian side” controlled by the Taliban, adding that militants are “wild” and “dangerously firing and beating civilians.”

“These are the two realities of what’s really happening here,” Pannell observed.

Also reporting from the Afghan capital, CNN’s Clarissa Ward said Taliban fighters on security detail were firing live rounds into the air to disperse crowds, but were “not targeting people.” Gunfire could be heard popping off in the distance at one point during her broadcast near the Kabul airport.

A Taliban official also told Reuters that shots were fired into the air for crowd dispersal, adding “We have no intention to injure anyone.”

Footage of the airport’s north gate and other areas guarded by American soldiers also made the rounds, with one clip showing anguished Afghans begging the GIs for help through a barbed-wire barrier.

A CBS correspondent said the video also showed “Americans trying to access the airport,” later adding that they “did get inside,” although the nationalities of those seen in the clip could not be confirmed.

Other scenes outside the airstrip purported to show Afghans attempting to hand young children over a security fence in a last-ditch effort to get them out of the country, while American troops were also seen hoisting a woman over a concrete barricade, where a massive crowd had gathered.

The US 82nd Airborne Division has reportedly carried out patrols along the airport’s tarmac, where “thousands” of civilians remained camped out, according to journalist Alex Tiffin, who gathered a large amount of footage.

Earlier in the day, US Defense Secretary Lloyd Austin said that American forces would not be sent to gather stranded Americans unable to reach the Kabul airport, arguing he did not want to “distract” from securing the airfield while acknowledging that “We don’t have the capability to go out and collect a large number of people.”

Austin’s comments came after the US Embassy in Afghanistan warned American citizens that Washington “cannot ensure safe passage” to the airport, largely leaving them to navigate a sprawling network of Taliban checkpoints on their own.

Around 15,000 Americans remain stuck in Afghanistan after the Taliban seized the capital last Sunday, according to the Associated Press. The militant group swept all of Afghanistan’s major cities in the week prior, leaving only a single province standing – Panjshir, historically a stronghold for anti-Taliban forces.

British officials have reportedly voiced concerns that the US would soon remove 6,000 or so troops sent to guard the airstrip, saying the evacuation of UK staff could not continue without their presence. However, US President Joe Biden told ABC’s George Stephanopoulos that every effort would be made to pull out all American citizens and US allies from the country, even if that meant staying beyond his August 31 withdrawal deadline.

While Taliban representatives have vowed to give amnesty to Afghans who collaborated with the US-backed regime in Kabul and refrain from striking American forces as they make their exit, the group has also suggested it would renew attacks on Western troops should they remain in the country beyond Biden’s original September 11 pullout date.