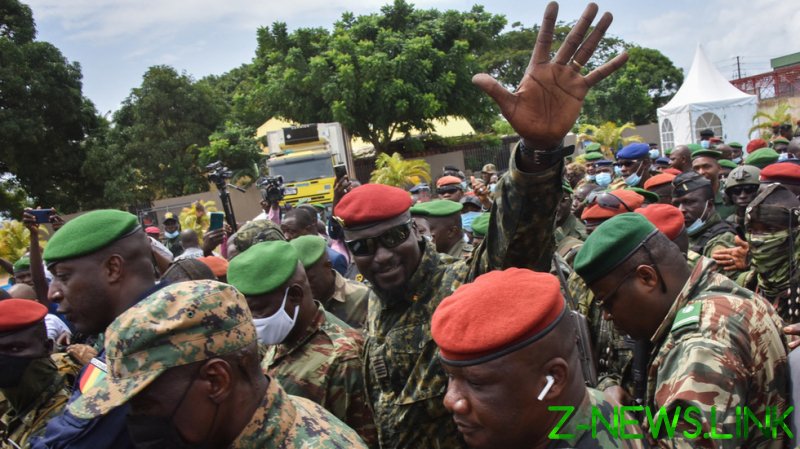 Lieutenant-Colonel Mamady Doumbouya, the country’s new leader, has pledged to lead a national unity government, assuring foreign investors that their interests in the country won’t be adversely affected by the change, although bauxite prices have already been sent spiralling.

The coup prompted a highly unusual response from China, which, in apparent contravention of its longstanding policy of non-interference in foreign affairs, condemned the action and called for Condé’s release. This unprecedented intervention may be explained by Guinea being one of several African countries in which Beijing has expanded its mining operations in recent months. US officials have also expressed disapproval, with the State Department hinting that punitive sanctions could be imposed.

Conakry’s new president is a rather intriguing character. The media biographies that have been published to date begin with his return from the French Foreign Legion to join the Special Forces Group, an elite military unit created by Condé. However, a particularly striking aspect of his career is yet to be acknowledged by a single mainstream outlet: Doumbouya and the unit he leads have received extensive special-operations training from the US military overseas.

An October 2018 Facebook post by the US Embassy in Guinea pictures Doumbouya in front of the diplomatic mission’s offices, alongside US military personnel, and notes that he was preparing to participate in exercises abroad under the auspices of Exercise Flintlock. A video dated February 2019 features the lieutenant-colonel discussing the program.

Flintlock was launched in 2005 to provide counter-terror support to West African nations. Ironically, given recent developments in Guinea, the training is intended to complement the  conducted by bogus humanitarian agency USAID promoting “good governance” and “security” in the region. Two years later, the US Africa Command (AFRICOM) was inaugurated, which effectively embedded Washington in the armed forces of 53 countries across the continent.

Ever since, Flintlock-trained soldiers have been at the forefront of the majority of coups in West Africa. In August 2020, Colonel Assimi Goita, who’d participated in a US-led training exercise the previous year and graduated from a separate US training course in 2016, seized power in Mali. Photos of Goita receiving a certificate from his trainers at a US-German security centre were abruptly purged from the web.

Only eight years prior, Captain Amadou Sanogo, who’d been trained by the US on six separate occasions, led a coup of his own in Mali, which, in turn, emboldened the country’s Islamist insurgency, leading to French military intervention in 2013. AFRICOM officials referred to Sanogo’s actions as “very worrisome for us”, and US General Carter Ham, who had led the operation at the time, admitted there had been significant failings.

“We were focusing our training almost exclusively on tactical or technical matters. We didn’t spend probably the requisite time focusing on values, ethics and a military ethos,” he lamented. “When you put on the uniform of your nation, you accept the responsibility to defend and protect that nation, to abide by the legitimate civilian authority that has been established, to conduct yourselves according to the rule of law. We didn’t do that to the degree that we needed to.”

Nonetheless, that AFRICOM training could have disastrous consequences had already been clear for many years at that point. In December 2008, Captain Moussa Dadis Camara seized power in Guinea – he too had received extensive tutoring under the program. While he led the country for a mere 12 months, his rule was characterised by brutal violence of a frequently sexual variety.

In September 2009, Camara dispatched the presidential guard to suppress an opposition protest. The troops opened fire, and bayoneted and gang-raped attendees in broad daylight, killing at least 157 people and injuring around 1,200 more. According to numerous witness accounts, some women were raped using gun barrels, and several victims were shot through their vaginas.

In 2019, AFRICOM’s premier training event was conducted in Burkina Faso – even Military Times, the journal of record for current and former US military personnel, asked whether it was a sensible move, given the country’s human rights record and security situation.

In response to these concerns, the US ambassador merely said it was “important” to look at allegations of abuses “in light of the environment in which the country is working”. AFRICOM chief Major General Mark Hicks also alleged training military partners in human rights law compliance was an “absolutely critical” element of the program. Clearly, the need to avoid PR disasters has been factored into training efforts – although the events in Guinea starkly underline the fact that soldiers obviously aren’t tutored in respect for democracy.

Given Africa’s extensive history of coups before the institution of Flintlock, it might be tempting to dismiss the apparent association between US military training and government overthrow as correlative, rather than causative. Yet, a 2017 Journal of Peace Research study found that Washington’s foreign military training efforts – presently numbering 34, and involving almost every country in the world – roughly doubles coup risk in recipient states.

Using data from 189 countries between 1970 and 2009, the research shows that two-thirds of successful coups during this 40-year period were carried out by officers who had participated in US training, not least because these programs greatly increase the military’s power in relation to the government.

As analyst Tom Fowdy has noted, Africa is increasingly becoming a central theater in the new Cold War, as China seeks to expand its economic interests, and reduce its reliance on imports from ‘hostile’ nations such as Australia. As the conflict hots up, Washington needs all the ground troops it can muster – and with quite so many AFRICOM alumni able and willing to take action in the most violent manner imaginable at a moment’s notice, it would be no surprise if the number of palace revolutions across the continent gain in both frequency and volume in the years to come.