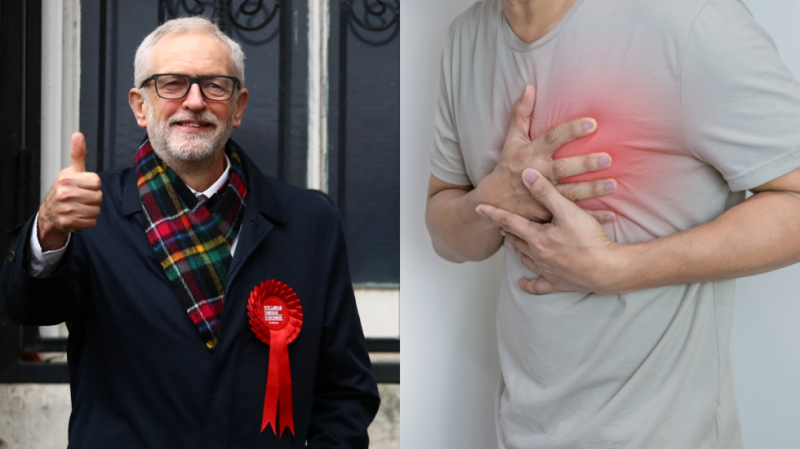 In the hierarchy of journalists, there are none hardier than war correspondents. They risk life and limb to report from the world’s most dangerous conflict zones, yet the Guardian’s Rafael Behr appears to believe that reporting on Brexit and fretting over Jeremy Corby’s leadership of the Labour Party can be equally dangerous for one’s health.

Behr suffered a heart attack mid-jog in London on New Year’s Eve 2019, and as he lay recuperating in the days and weeks that followed, he pinned the blame for his cardiac arrest on the “tension and drama of British politics.”

By the end of 2019, Behr was “wrung out” covering Brexit, he wrote in a Saturday op-ed in the Guardian. Over 40 floridly written paragraphs, Behr described “nerve-shredding” parliamentary votes, “visceral anxiety about the character of Brexit,” and a political atmosphere like “a fine chemical mist that coated everything.” He became irritable with his children, and began to look “puffy and grey” from the stress of Britain’s meandering path toward leaving the EU.

The hyperbole didn’t stop with Brexit. As a Jew, Behr worried that the ascendancy of former Labour Party leader Jeremy Corbyn – accused by some of stoking anti-Semitism within the party – would spell doom for Britain’s Jews. “At least we are finding out who would have hidden us in their attic,” he quotes a Jewish friend as saying, adding: “we laughed because it wasn’t even a joke.”

“The combination of Brexit and Corbynism had me in a state of fizzing unease,” he wrote.

Behr’s dramatics were mercilessly mocked online. “Anyone who sincerely believed that Jeremy Corbyn becoming prime minister was going to lead to another Holocaust should be under psychiatric care, not writing columns,” one commenter wrote.

Behr’s article is a follow-up to a piece he wrote in early 2020, immediately after his heart attack. Instead of blaming Corbyn at the time, he compared Britain’s moves toward extricating itself from the EU to the warning signs that preceded his own medical emergency.

He’s not the only Guardian journalist to blame external political machinations for his personal misfortune. Columnist Brigid Delaney complained in 2018 that she stopped going to the gym after Donald Trump defeated Hillary Clinton in 2016, replacing exercise with agonizing over whether Trump would destroy the world with “nuclear weapons or climate change.” Such was the malaise that set in, Delaney was left too weak “to open jars and carry groceries.”

In similarly dramatic fashion, legions of journalists were mocked after comparing the riot on Capitol Hill earlier this month to 9/11 and Pearl Harbor.

As commentators mocked Behr on Sunday for his op-ed, Corbyn himself launched his ‘Peace and Justice Project’, a think tank-like organisation he says will “bring people together for social justice, peace and human rights in Britain and across the world.” Inducing heart attacks in journalists is presumably not among its aims.