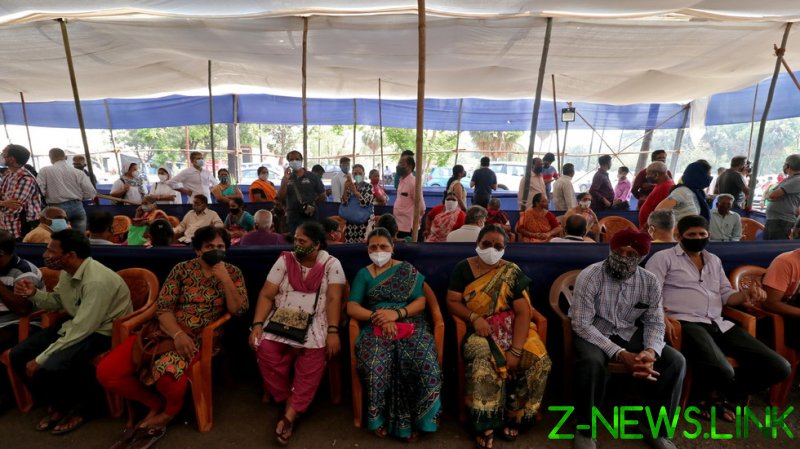 The number of infections has shot past 20 million, with India’s Health Ministry recording 357,229 new cases on Tuesday. The country has added 10 million cases in just over four months, during which it was hit by a devastating second wave of the virus.

Some 3,449 deaths were recorded on Tuesday, raising the total death toll from the pandemic to 222,408.

The news comes as the Indian healthcare system struggles with overcrowded hospitals and shortages of medical oxygen required to save Covid-19 patients with breathing problems. The crisis has prompted the government to urgently look for vital medical equipment abroad.

The first shipment of 900 oxygen tanks from the UK was delivered by the Indian military on Monday. Further deliveries of oxygen tanks, oxygen concentrators, lung ventilators and other supplies were secured from countries including the US, the UAE, Kuwait, and Thailand. Officials also organized the delivery of oxygen to Delhi and other hard-hit regions by rail.

Meanwhile, Rahul Gandhi, one of the leaders of the Indian National Congress, the chief opposition party in parliament, has called for a nationwide lockdown.

“I just want to make it clear that a lockdown is now the only option because of a complete lack of strategy by [the government],” Gandhi tweeted, adding that there was no other way to stop the spread of the virus.

The government’s “inaction is killing many innocent people,” he wrote.

Indian media reported that the government led by Prime Minister Narendra Modi has been reluctant to impose a nationwide lockdown, opting for regional lockdowns instead.

Modi said last month that regional authorities should focus on setting up “micro-containment zones” in areas with high infection rates, and that lockdowns and curfews should be the last resort.