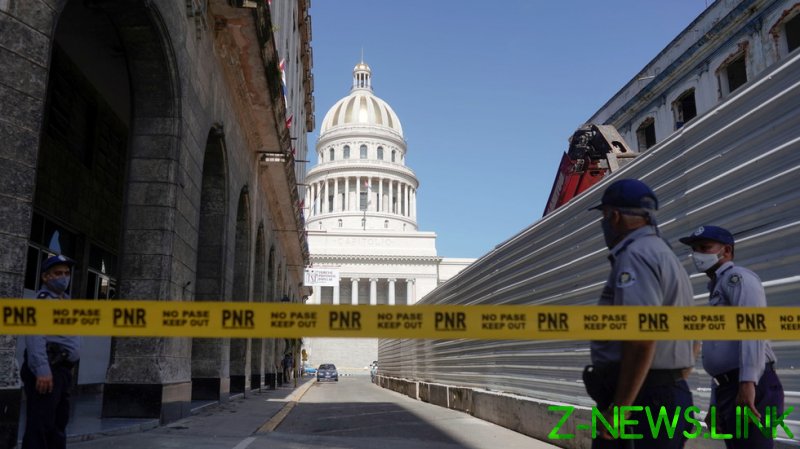 Havana has blamed the US for the protests that erupted across dozens of Cuban cities on Sunday. President Miguel Diaz-Canel said on Monday that the continuing US policy of “economic suffocation” against the island nation has caused shortages of food and medication and power outages.

Speaking to reporters at the State Department on Monday afternoon, however, Blinken said “it would be a grievous mistake for the Cuban regime to interpret what is happening in dozens of towns and cities across the island as the result or product of anything the United States has done.”

Washington put Cuba under a trade embargo in 1958, after revolutionaries overthrew the US-backed dictatorship of Fulgencio Batista.

As Blinken was speaking to reporters, Biden himself made a statement about the “remarkable” protests, calling on the Cuban government “to refrain from violence and the attempts to silence the voice of the people.”

He also echoed the statement issued earlier in the day by the White House and posted on his presidential twitter account, which spoke of Cubans “bravely asserting fundamental and universal rights” that must be respected and calling on the “regime” in Havana “to hear their people and serve their needs at this vital moment rather than enriching themselves.”

White House press secretary Jen Psaki had described it as a statement “we put out in the president’s name this morning, in his voice of course,” raising some eyebrows among Republicans.

The Obama administration, in which Biden was vice president, moved to relax some of the restrictions against Cuba, culminating in the reopening of embassies in 2015. Most of these measures were reversed by President Donald Trump in November 2017, however. Unlike many Trump administration policies revoked by Biden since he took office in January, these sanctions against Cuba remain in effect.