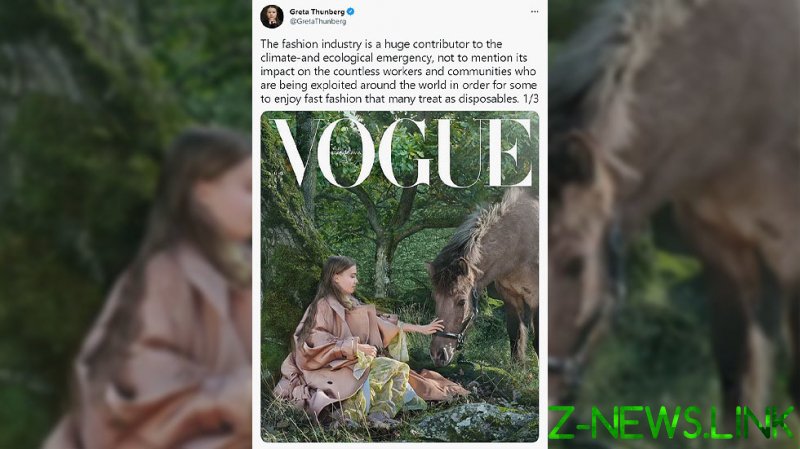 For its first ever issue, Vogue Scandinavia features Thunberg on the cover, which was revealed to the world over the weekend in a thread by Thunberg herself, calling for major changes in the fashion industry.

“The fashion industry is a huge contributor to the climate and ecological emergency, not to mention its impact on the countless workers and communities who are being exploited around the world in order for some to enjoy fast fashion that many treat as disposables,” she tweeted.

Efforts by fashion companies to promote themselves as “sustainable,” “ethical,” and “green,” Thunberg argues, is “almost never anything but pure greenwash.”

Thunberg’s cover features her sitting under a tree, wearing an oversized trench coat and petting a horse.

The fashion industry was previously recognized by the United Nations as one of the most polluting industries in the world.

While Thunberg’s cover was celebrated by her substantial fanbase – she boasts five million followers on Twitter – some could not help but see the contrast of a Vogue cover and criticism of the fashion industry as prime material for mockery.

Some, however, argued that Thunberg’s seeming lack of interest in fashion as a hobby made her message about the industry more impactful, and suggested it would help Vogue deliver that message to an audience most interested in the industry.

Thunberg claimed in her interview with Vogue that she hasn’t bought new clothes in years and the last item of clothing she purchased was “second-hand” – and that was three years ago.

“I just borrow things from people I know,” she said, adding that the fashion industry cannot “sustainably” mass produce today and needs a “system change.”