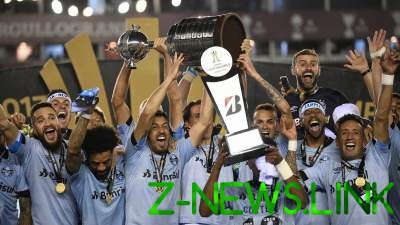 In the group stage Gremio under the leadership of Renato Gaucho in company with the “Guarani”, “Deportes the Yixin” and “Zamora” scored 13 of 18 points and reached the 1/8 finals from the first place.

The victory in the first match of Gremio brought the only goal of the ex-defender of “Hertha” and “Wolfsburg” Cicero. In the second leg goals from Fernandinho and Luan Vieira before the break decided the fate of the title.

An added bonus for “Gremio” was the ticket to the club world Cup. In December, the Brazilian club in the semi-final will play the winner of the “Guadalajara” (Mexico) — “Widad Casablanca” (Morocco).

The best player of the Libertadores Cup in 2017 was the forward of “Gremio” Luan Vieira, and scoring the race was won by 37-year-old forward of “Lanus” Jose sand, who scored nine goals.