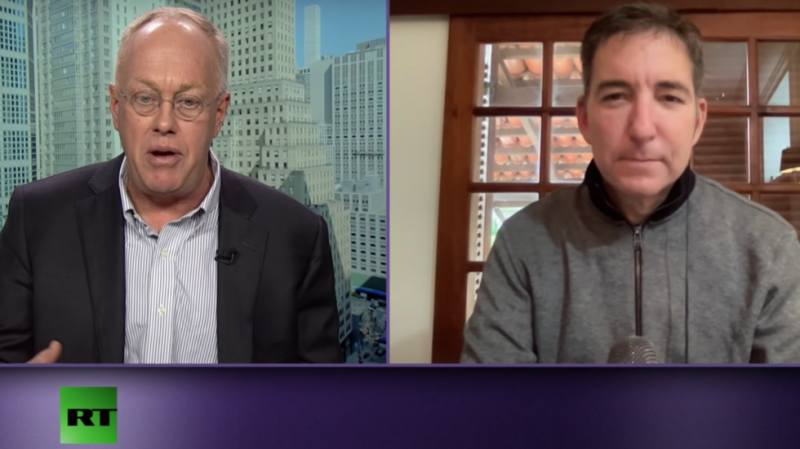 Those who “questioned” measures taken in the name of combating terrorism were treated as terrorist sympathizers in the months following the 9/11, Greenwald told Hedges during an appearance on RT’s ‘On Contact’, and the same argument is being made now by the media and Congress against anyone questioning the government’s response to January 6.

“Exactly the same thing is happening now,” the investigative journalist said, noting that the Justice Department’s targeting of “mostly poor and impoverished and lawyerless people” is similar to what was experienced by many Muslims who faced accusations or ended up in Guantanamo Bay, with few legal options.

Those accused of terrorism struggled to find representation, as numerous accused Capitol rioters have, with Congress and the media essentially making them “radioactive.”

“What they’re doing here is essentially running a parallel investigation to the Justice Department because they’re angry that the Justice Department hasn’t indicted anybody on these grandiose claims,” Greenwald said of the House committee investigating the riot, calling the actual investigation a “spectacle” to feed a “hungry liberal mob.” A federal grand jury released an indictment for former Donald Trump advisor Steve Bannon for failing to answer a subpoena to testify in front of the committee earlier this week.

Congress’ involvement helps to “vilify” those accused as a “supplement” to the Justice Department’s already questionable treatment, Greenwald argued. Greenwald has referred to this as the “second war on terror” due to the similarities in government action. Numerous Capitol rioters taken into custody have been denied bail and reportedly faced harsh conditions in prison, similar to the treatment of those accused of terrorism in the months following 9/11.

People being investigated in connection with January 6 are often not even aware, Greenwald added, thanks to third-party subpoenas provided to phone companies, email servers, etc. that request the person in question not be informed. The lack of oversight and safeguards makes it “almost knowingly and deliberately illegal,” the journalist, who is famous for publishing materials on mass US government surveillance exposed by NSA whistleblower Edward Snowden, said.

Another striking similarity, Greenwald told Hedges, is reports of the FBI’s involvement with the acts in question. Many domestic terror plots foiled by officials in the months following 9/11 involved numerous FBI agents and informants, Greenwald recalled, and the same could be true for January 6, as reports have indicated FBI informants were in contact with some at the protest.

“To what extent did the FBI have advanced knowledge?” Greenwald asked, noting many of the “ringleaders” encouraging violence on January 6 have not been charged, while numerous nonviolent offenders have.