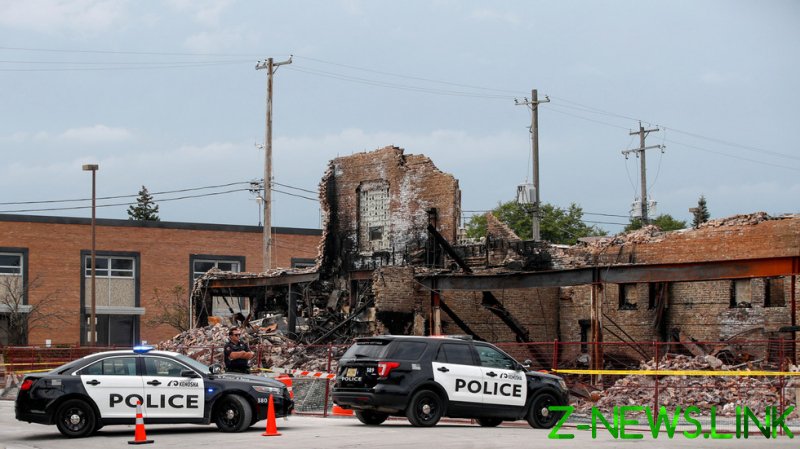 “Meet the Riot Squad: Right-Wing Reporters Whose Viral Videos Are Used to Smear BLM,” blares the headline of the Intercept article, written by Robert Mackey and published Thursday.

It names eight reporters who “roam from city to city, feeding the conservative media’s hunger for images of destruction and violence on the margins of left-wing protests” and calls them part of a “video-to-Fox News pipeline.”

Mackey claims that “right-wing news outlets and politicians have been desperate to draw attention away” from the video of George Floyd’s death in Minneapolis last May “by focusing instead on viral videos of unrest at racial justice protests.” Instead, he argues, the “broader picture” is that “Black Lives Matter protests have been overwhelmingly peaceful” and “conservatives” saying otherwise are “cherry-picking misleading data” and relying on “isolated images of chaos, like those recorded by the Riot Squad.”

Independent journalist Michael Tracey – who traveled across the US last year to report on the aftermath of the riots – challenged that assertion on its face, tweeting that “there is nothing ‘right-wing’ about documenting the destruction that was unleashed in American cities” especially when most of the media – the Intercept included – “was either ignoring it or actively obfuscating it”

Others noted a more sinister undertone to the Intercept piece – painting a target on the backs of the “Riot Squad” so violent protesters would attack them on sight.

“The intercept [sic] is trying to make sure there’s no independent reporting on the ground just propaganda,” tweeted videographer Luke Rudkowski.

That was also the position of Glenn Greenwald, who co-founded The Intercept back in 2014 but resigned in October 2020, saying the outlet had become unrecognizable, partisan and censorious.

“The Intercept is now actively targeting two journalists of color,” Greenwald wrote. “They have two white male reporters here putting a target on their backs for the crime of reporting on Antifa riots. This is genuinely disgusting and dangerous. Press freedom groups should condemn this.”

“They’re showing Antifa which 2 journalists they should look out for. That’s what this is for,” he added, and provided an example:

In announcing his resignation from the Intercept, Greenwald said the publication – originally a vehicle for publishing NSA whistleblower Edward Snowden’s files – “now bears absolutely no resemblance to what we set out to build – not in content, structure, editorial mission or purpose,” and had devolved into “just another media outlet with mandated ideological and partisan loyalties” to the Democratic Party.

Outlets that employ the targeted journalists also fired back, thanking the outlet for free publicity. The Daily Caller called it a “laughable smear attempt,” adding that they stood by the “brave reporting” of the Riot Squad and thanking the Intercept for “highlighting their important work.”

DC’s editor in chief Geoffrey Ingersoll called Mackey “a hard left hack job” and his article a “s**tpile dressed up as journalism,” among other things.

“Slanted would be a compliment for his style of reporting. It would make [Fox News host] Sean Hannity blush in its shamelessness,” Ingersoll added.

“This is why people hate the media. Some would rather try to discredit the hard work of others because they are reporting the facts,” said Townhall’s Julio Rosas, one of the reporters brought up in the piece, adding that Mackey never reached out to him for comment.

Rosas thanked the Intercept authors for “beclowning” themselves and said he was headed to the US-Mexico border next, adding, “Let me know if you want to do a failed smear piece on that too.”

“We stand by, and will always stand by [Julio’s] fearless reporting of the BLM/Antifa riots and ongoing border crisis,” Townhall tweeted, calling the Intercept article a “despicable smear” that only shows the importance of “conservative journalism.”

Protests over the death of Floyd – an African-American man – in Minnesota last May quickly turned violent and resulted in the burning of a Minneapolis police precinct and much of the nearby neighborhood. They quickly spread across the US and caused billions of dollars in property damage as well as at least 20 deaths, according to preliminary estimates.